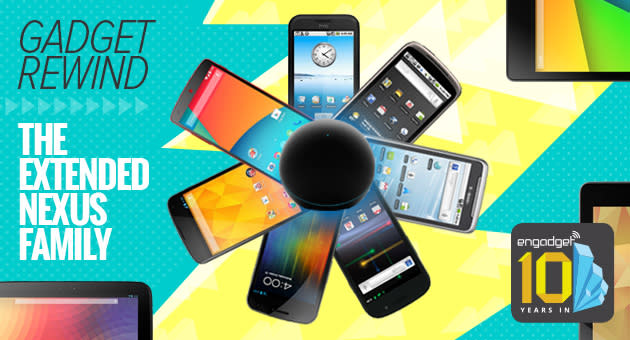 Google's Nexus line has long stood as the company's ideal vision of its widely adopted, open-source Android operating system. The devices, be they smartphones, tablets or even one-off media streamers, are built in conjunction with select hardware partners and represent an ideal marriage of tech specs with an unadulterated version of Android. It's Google's way of dealing with fragmentation (read: skinned versions) in the mobile OS market it created; a reference mark for manufacturers to aspire to, so to speak.

On the tail of the original Android handset's sixth anniversary and in the run-up to whatever new Nexuses come next, we take a look back at the hardware path that's been Google's gold standard for Android.

15
In this article: gadget rewind, gadgetrewind, galaxy nexus, gear, google, google android, google nexus, googleandroid, googlenexus, googlephone, htc, lg, mobile, mobilepostcross, nexus, nexus 10, nexus 4, nexus 5, nexus 7, nexus one, nexus q, nexus s, samsung, t-mobile, t-mobile g1
All products recommended by Engadget are selected by our editorial team, independent of our parent company. Some of our stories include affiliate links. If you buy something through one of these links, we may earn an affiliate commission.