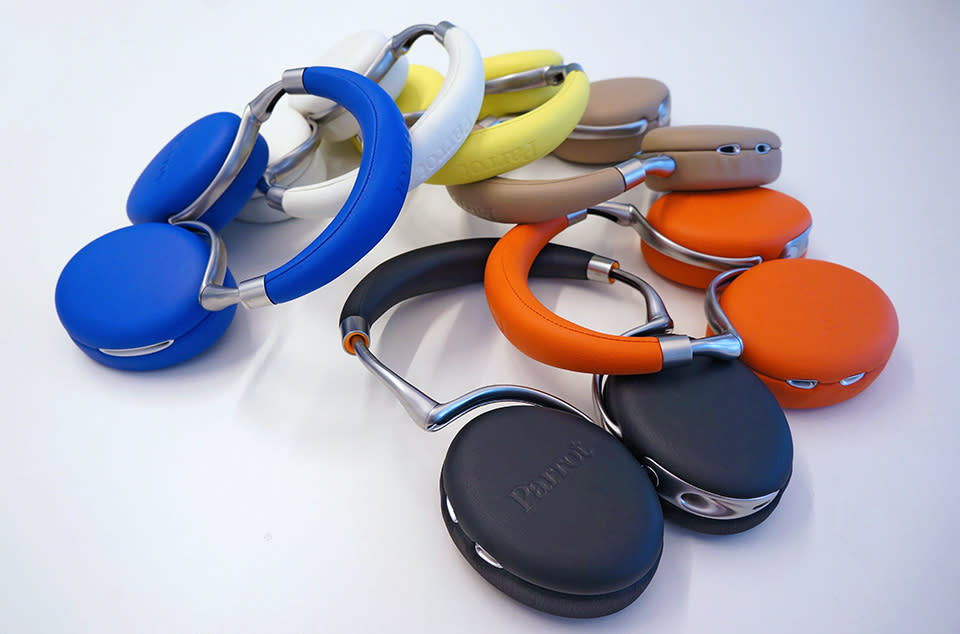 As much as we enjoy Parrot's advanced Zik Bluetooth headphones, many complained that they're a tad on the hefty side, and not everyone's a fan of the earcups' bulky look. Worry not, though, as the French company has finally delivered a new and improved version to tackle these issues. The aptly named Zik 2.0 weighs in at 270g, which is 17 percent (or 55g) lighter than its predecessor. Not bad considering all the original features remain, especially the large trackpad -- this time with a soft-touch leather exterior -- on the right earcup for playback and volume swipe gestures, as well as NFC and the removable battery on the left side. With the help of Philippe Starck once again, the earcups now feature a more rounded design that should appeal to a larger audience; but, externally, the rest of the headphones are pretty much the same as before, aside from the thicker headband padding and more spacious ear cushions. In addition to the original white and black looks, you now get other color options: blue, mocha, orange and yellow.

The Zik 2.0 isn't just about weight reduction and updated looks, though. These cans come with eight microphones -- and you thought five was already a lot on the original model -- for their new adaptive noise reduction feature, which can be adjusted via the companion iOS or Android app to best suit your listening environment. And its new "Street Mode" lets you control how much of the outside world you let in -- ideal for staying aware of your surroundings while still enjoying some tunes. Speaking of which, the app also comes with an increased variety of audio tuning presets from Parrot's artist buddies (including the late Lou Reed) so you can enjoy their songs just the way they intended. You can even create and share your own presets with other users.

For those who already have HD Voice on their phones and networks, we have good news: The Zik 2.0 supports it as well. As for music playback quality, we expect no less than what we got from the original Zik, which has worked well for us on iPhones and HTC phones. There are also new settings on board to help extend your battery life depending on your situation. Turn on the "Flight" mode and we're told you'll eek out 18 hours of wired listening while noise cancellation is still engaged, although you'll have to do without some of the special audio features. "Eco" aims to provide about seven with a wired connection, while still providing spatialization effects, and "Normal" should get you about six hours of Bluetooth listening with all the extras.

The Parrot Zik 2.0 headphones are expected to arrive in November and will cost $399, just like their predecessor. If you'd like to snag a pair, they'll be available at Apple and Brookstone stores at launch time.

In this article: bluetooth, headphones, parrot, PhilippeStarck, starck, zik, zik2, zik2.0
All products recommended by Engadget are selected by our editorial team, independent of our parent company. Some of our stories include affiliate links. If you buy something through one of these links, we may earn an affiliate commission.