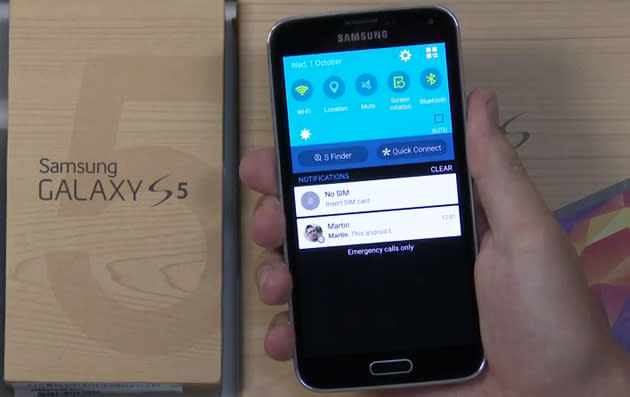 You've probably seen plenty of Google's stock Android L interface by now, but custom interfaces are another story. What will the OS look like when device makers get hold of it? If SamMobile's experience with an early, leaked version of Samsung's TouchWiz software is any indication, it will be... remarkably familiar. At least on the Galaxy S5, it looks like the current front-end with splashes of Google's Material Design philosophy thrown in. Core apps and notifications are now full of card-like, colorful elements, but the home screen, app tray and many other elements resemble what you've seen on existing Samsung hardware.

This doesn't preclude a more conspicuous interface redesign for devices built for Android L from the start, of course. Also, SamMobile is quick to warn that this is very rough code. Many animations are missing, and the performance isn't up to par just yet. And however unfinished this TouchWiz build may be, its mere existence is good news -- it suggests that manufacturers could upgrade your device to the latest Android release comparatively quickly.

In this article: android, androidl, galaxys5, materialdesign, mobilepostcross, samsung, smartphone, touchwiz, video
All products recommended by Engadget are selected by our editorial team, independent of our parent company. Some of our stories include affiliate links. If you buy something through one of these links, we may earn an affiliate commission.