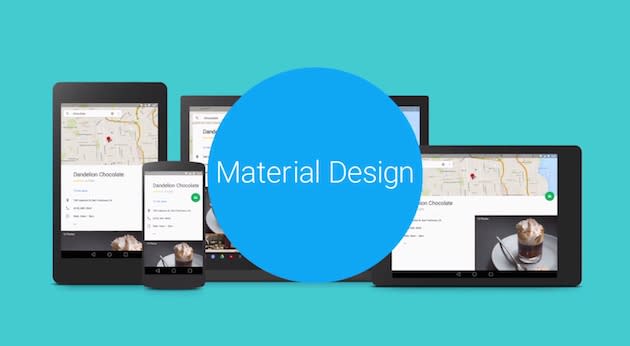 Google's annual I/O developer keynote has only just begun, but already we're being treated to some of its announcements. In a bid to create a new "visual language" for users, Google is taking the design of its Android, Chrome OS and web properties back to basics with its new "Material Design." According to Google, Material Design is intended to make better use of available space, and bring a consistent user experience whether viewed on a smartphone, tablet or desktop. Google's apps will be updated to reflect this change, as you may have seen in early Gmail and Calendar app leaks and in the latest version of the Google+ app on Android. The new design language is more than just a visual refresh, though. In its onstage demo, Google showed new animations that are designed to present the maximum amount of content while ensuring that scrolling remains smooth. It's hoped that by offering improved typography (including a new Roboto font), grids and more color, Google's apps and services will become more consistent, making it easier for users to interact with them.

"Unlike real paper, our digital material can expand and reform intelligently. Material has physical surfaces and edges. Seams and shadows provide meaning about what you can touch," says Matias Durate, Google's director of Android user experience. He walked through just a few of the new elements, but you can get an idea of what to expect by visiting Google's new Design website.

Developers are invited to study the new guidelines and implement new features, such as real-time UI shadows and "hero" elements (which can be passed between screens) on Android. They can also assign an elevation value to each part of their apps, letting Google's framework automatically generate virtual light sources to create a sensation of depth and visually indicate which areas of apps can be interacted with.

Like Apple and Microsoft, Google is attempting to create a design language that can bridge various form factors. We recently saw Apple bring its mobile and desktop platforms closer together with the launch of iOS 8 and OS X Yosemite, but Google's Material Design will also encompass its large suite of web apps, including Search. We can expect Gmail and Calendar web apps to reflect the new look soon, with Android developers not too far behind -- Google made its new APIs available today, allowing anyone with a developer account to incorporate its new design language into their apps.

In this article: android, android l, chrome os, design, google, google io, googleio2014, material design, mobilepostcross, play edition, play store, smartphones
All products recommended by Engadget are selected by our editorial team, independent of our parent company. Some of our stories include affiliate links. If you buy something through one of these links, we may earn an affiliate commission.