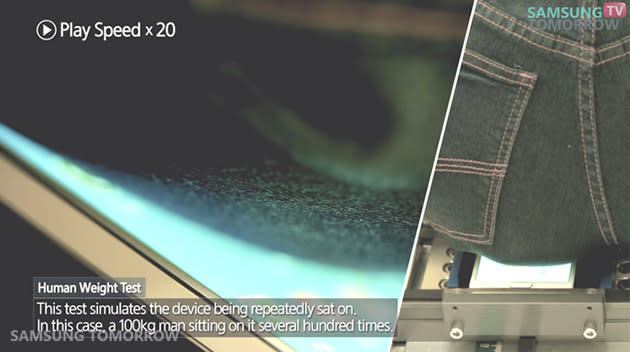 Samsung wants you to know that the Galaxy Note 4 doesn't bend and break like, ahem, certain competitors even if you sit on it over and over again. So, the company has uploaded a video showing the types of stress tests the handset goes through, like the one it released years ago for the S 3 and Note 2. This time, though, the video aggressively hints (repeatedly, even) that the Note 4's a lot tougher than the new iPhones. Similar to the tests its previous handsets had to endure, the Note 4's subjected to a three-point bend test that pushes a metal with 25 kilograms of force to the middle of the device -- you can even see the phone bend just a little during the process in the video after the break. Also, the phones apparently have to survive getting sat on by robotic buttocks that simulate the force a 220-pound person's capable of.

According to Samsung, the Note 4 owes its toughness to its metal frame and magnesium bracket, which hold all its components together. By the way, that metal frame is one of the device's most talked about component these days. See, early adopters in South Korea have discovered that there's a gap in between the frame and the screen big enough for a business card to go through, which might even expand over time. To shoot down rumors that it's an unfortunate oversight on the company's part, Samsung added a section in the Note 4's European release manual explaining that the gap's a "necessary manufacturing feature."

In this article: mobilepostcross, note4, samsung, StressTest
All products recommended by Engadget are selected by our editorial team, independent of our parent company. Some of our stories include affiliate links. If you buy something through one of these links, we may earn an affiliate commission.