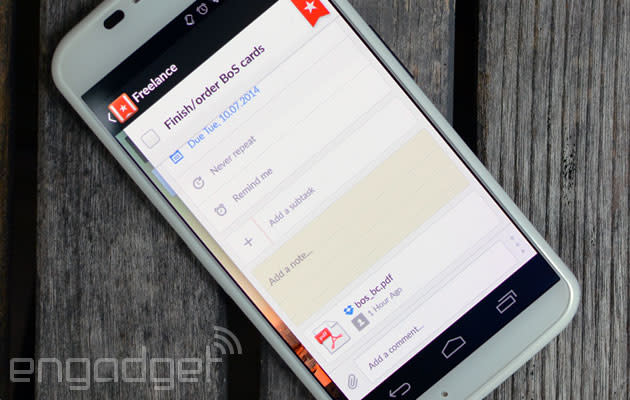 Wunderlist has long been a popular choice for folks looking to wrangle both individual and collaborative to-do lists. With today's update though, the productivity app gets a major boost from Dropbox. When creating a new task, you can attach files from that cloud-based repository, and they're accessible right from the to-do list. From an item's detail menu, simply clicking the paperclip or Dropbox icon allows you to hunt for the file(s) you'll need, added as links for easy grabbing later. Update a document that's attached to a task? No worries. It'll automatically sync, ensuring that the latest version is available when needed. As TechCrunch notes, this is Wunderlist's first third-party integration and it's one that'll save some time searching for and opening up files. TC also reports that Evernote and calendar syncing could be next up. If you're anxious to give it a try, the new version is available now on iOS, Android and on the web.

In this article: app, dropbox, productivity, software, to-do, to-dolist, todo, todolist, wunderlist
All products recommended by Engadget are selected by our editorial team, independent of our parent company. Some of our stories include affiliate links. If you buy something through one of these links, we may earn an affiliate commission.