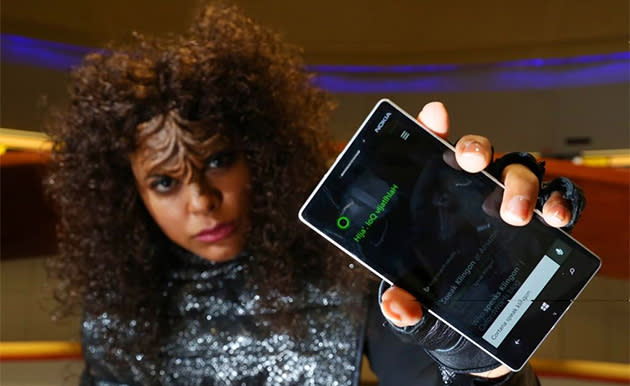 To celebrate the launch of the Lumia 830 in the UK and all of the Trek-flavored nerdiness going down at Destination Star Trek in London, Microsoft has taught given its virtual assistant a crash course in the ways of Qo'nos -- by which we mean Cortana can now speak a little Klingon. All you'll have to do is ask, though the first thing the xenolinguists among you will probably notice that her and vocabulary and pronunciation are just awful. SlashGear also adds that Cortana responds when you refer to her as "Number One" -- Commander Riker can't be too pleased about that one -- as well as when you tell her to beam you up or "set phasers to stun". The smarts enabling Cortana's new behavior haven't started making the rounds yet outside of the UK yet, but a Microsoft spokesperson confirmed to us those Starfleet commands will work in the US in the coming weeks. In the mean time, there are still other ways to get a feel for Redmond's Trekkie credentials: remember, that Bing's Translator can kinda-sorta tackle textual Klingon too.

In this article: cortana, gear, lumia, lumia830, mobile, mobilepostcross, nokia, TL16winfon, windows, windowsphone
All products recommended by Engadget are selected by our editorial team, independent of our parent company. Some of our stories include affiliate links. If you buy something through one of these links, we may earn an affiliate commission.