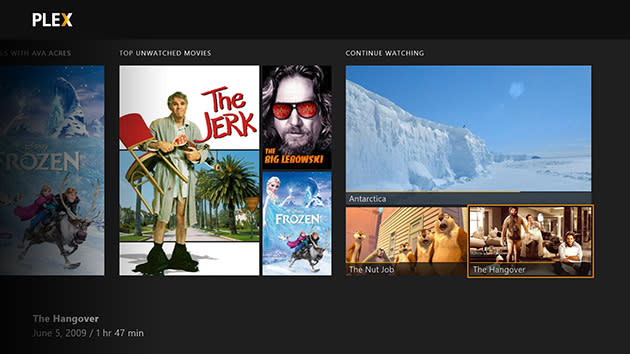 Plex has more than its share of fans thanks to its powerful and versatile streaming media capabilities. If you've got a video file (regardless of how you obtained it) there's a good chance Plex can play it. And play it anywhere -- on your Roku, on your tablet, you smartphone, and now on your Xbox. Starting tomorrow Plex Pass subscribers will be able to pull up their Plex library on their Xbox One. And soon enough Xbox 360 compatibility will be added as well. If you're not a subscriber you'll be able to buy the Xbox apps for a one time fee (how much remains to be seen, but probably around $4.99) after the preview period ends. This is also the first time that Plex has been available on a game console, at least as a native app. You could pull in video to your Xbox over DLNA, but this is much easier and cleaner. And yes, you can control your library with voice controls or gestures thanks to Kinect support.

In this article: hdpostcross, microsoft, plex, streaming media, xbox 360, xbox one
All products recommended by Engadget are selected by our editorial team, independent of our parent company. Some of our stories include affiliate links. If you buy something through one of these links, we may earn an affiliate commission.