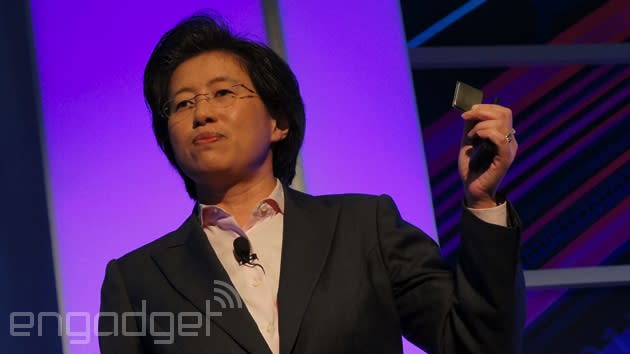 It feels like just yesterday that AMD brought in Rory Read to turn around its ailing fortunes, but today there's another changing of the guard. The chip designer has announced that chief operating officer Lisa Su is its new CEO, effective immediately; Read will stick around as an advisor until the end of the year. The company isn't going into detail about the reasons behind the shift, but it does say that Read has been planning a succession with the board of directors. It's an "ideal time" for Su to take the reins, the board's Bruce Clafin says.

Su hasn't said much about what she'll do so far, but she hints that she's likely to continue a strategy of crafting chips for "diverse" categories (think game consoles and mobile devices) that Read used to great success. Whatever the new CEO does, she likely has the right background for it. Su spent five years heading up technology development at mobile giant Freescale before she joined AMD in 2012, and she spent 13 years in semiconductor- and business-related positions at IBM before that. It's safe to presume that she knows a thing or two about the importance of super-efficient silicon.

In this article: amd, ceo, cpu, freescale, lisasu, mobilepostcross, processor, processors, roryread, tablet
All products recommended by Engadget are selected by our editorial team, independent of our parent company. Some of our stories include affiliate links. If you buy something through one of these links, we may earn an affiliate commission.