Let this shape-shifting baton escort you around town

The Tempescope shows you tomorrow's weather by physically creating it 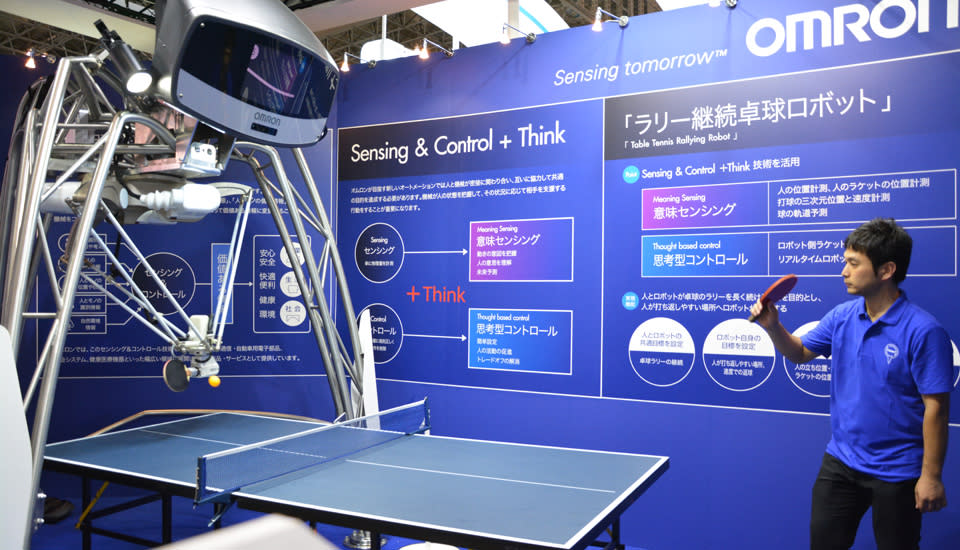 No, this isn't the Tokyo Game Show. OMRON, the alleged company behind Amazon Fire's face-tracking feature, exhibited its ping pong robot at CEATEC just to demonstrate its automation prowess. Well, by robot we don't mean the humanoid kind; it's more of a large silver crane that swings a bat with three arms. It even has a stationary head that looks down upon its human challenger (including this author, as shown in the video after the break); that's where all the sensors are stored in order to track the player and the ball. The brain, on the other hand, is tucked into a cabinet next to the robot.

Update: We managed to get a rematch with the robot, and you can watch it in our new video after the break.

For the sake of harmony between man and machine, OMRON actually lowered the robot's performance in order to let the humans win once in a while. Apparently the robot's strikes would be too fast if running at full capacity. Still, I was quite surprised by my metallic friend's speedy response to my volleys -- it was as if I was playing a casual game with another human, especially with the way it flipped the bat between left and right sides. The prototype did have one physical disadvantage, though: the arms weren't long enough to reach the middle of the table, so I had to hit the ball a bit further to keep the game going -- we managed 15 continuous volleys at best (and, most importantly, I came out in one piece afterwards).

While OMRON has no plans to commercialize this amusing machine, we can see how it could be repurposed for more practical tasks under constantly-changing conditions. According to Forbes' Michael Kanellos, this could make a more sophisticated "pick and place" robot that can quickly adapt to different production lines. And when no one's looking, it can go back to playing ping pong with fellow robots.

In this article: ceatec2014, featured, features, hands-on, omron, pingpong, robot, tabletennis, video
All products recommended by Engadget are selected by our editorial team, independent of our parent company. Some of our stories include affiliate links. If you buy something through one of these links, we may earn an affiliate commission.