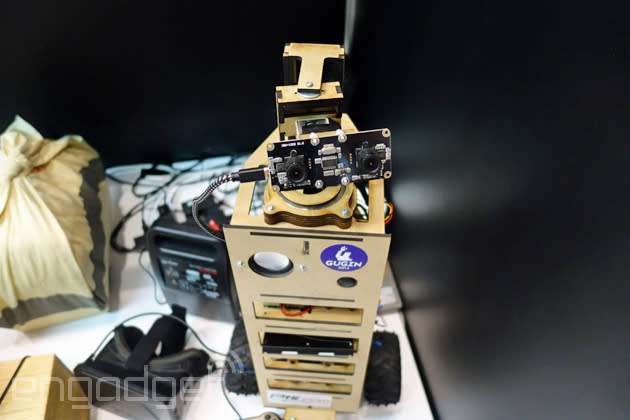 It's an unusual experience for a weekday afternoon: I stare up to see myself, staring up. I'm strapped into an Oculus Rift VR headset, which is both controlling (and streaming from) cameras atop a 1.5ft robot roaming around my feet. This robot on wheels is composed of segments that hold a stereo camera, storage, the "brains" and, importantly, a wireless internet connection to stream dual camera feeds to a nearby PC -- as well as receive movement instructions. The effect, courtesy of high-latency motion feedback from the Rift, is that when I turn to the right, or look upwards, the robot does exactly the same thing, with a motorized joint connected to the camera module matching my gaze.

Better still, I could control it with a games controller: One analog stick commanded front and back, while a second turned the little stack of electronics around. This adds an unusual in-game effect to the process, although you're simply streaming a view from your immediate vicinity. It's a surprisingly cool effect, but it's easy to imagine this kind of setup used for remote monitoring, or even a damn fancy telepresence call. Imagine combining this Oculus Rift view with something like SoftBank's Pepper robot and, well, things could get a little weird.

At CEATEC 2014 in Japan, the robot (which didn't have a name when I visited) is hidden away from the imposing booths of Fujitsu and Toyota. It's part of a stand showcasing entries for a Japan-based engineering and design prize, Gugen 2014. (In fact, last year's Gugen winner was the low-cost prosthetic, Handie, which you can hear more about here.)

In this article: ceatec, ceatec2014, gugen, gugen2014, hands-on, oculusrift, robot, video, vr
All products recommended by Engadget are selected by our editorial team, independent of our parent company. Some of our stories include affiliate links. If you buy something through one of these links, we may earn an affiliate commission.