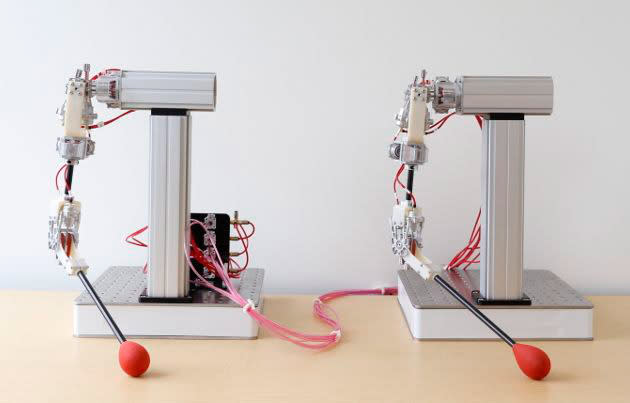 Disney may not have much of a stake in robots at the industrial scale, but the company sure employs plenty of animatronics at its parks and films. So it only makes sense that it would want to build the most natural moving robots it can and encourage you to suspend your disbelief. Its research labs have developed a new method for controlling mechanical puppets, without the usual motors, pumps or valves. Instead the set up you see above (and in the video after the break) relies on pneumatic tubes and air pressure. As a puppeteer moves one arm, the other mimics it exactly, with no bounce back, stuttering and an imperceptible delay. The result is accurate, natural motion with impressive precision. That could lead to more convincing movie monsters, animatronic attractions without the usual stiff jitters and perhaps even more life-like fully autonomous robots that are less awkward to interact with. The company has already pumped plenty of money in to building more convincing robots, and has even gone as far as figuring out a way to clone human faces. (Your days are numbered, you have been warned.) Make sure to check out the videos after the break, because this is something that needs to be seen to truly be appreciated.

In this article: animatronic, animatronics, disney, disney research, puppets, robots, video
All products recommended by Engadget are selected by our editorial team, independent of our parent company. Some of our stories include affiliate links. If you buy something through one of these links, we may earn an affiliate commission.