Recommended Reading: Why do we hate CGI so much? 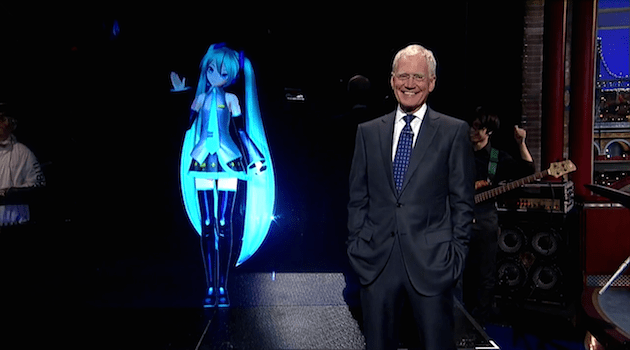 Hatsune Miku, also known to some people as Miku Hatsune, is already a sensation in her native Japan. But now she's taking her vocal talents to other parts of the world, including none other than the US. The virtual pop start appeared last night on the Late Show with David Letterman, where she performed her single "Sharing the World" in full hologram form. While the J-pop singer is well known in The Land of the Rising Sun, it's interesting that Hatsune's character, created by software developer Cryptone Future Media, is now showing up in mainstream media programs Stateside -- especially one as big as Letterman's late-night show. You can check out the performance in the video after the break.

In this article: David Letterman, DavidLetterman, Hatsune Miku, HatsuneMiku, Hologram, Late Show with David Letterman, Miku Hatsune, MikuHatsune
All products recommended by Engadget are selected by our editorial team, independent of our parent company. Some of our stories include affiliate links. If you buy something through one of these links, we may earn an affiliate commission.