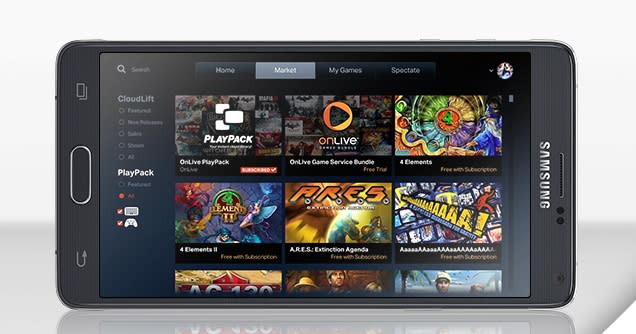 Ahead of the Galaxy Note 4's release in the US tomorrow, Samsung has a last-minute incentive for potential buyers as well as those who have already pre-ordered. The company just announced a new partnership deal with OnLive, which gives owners of its fresh, big-screen handset three months of free gaming through the streaming platform. Samsung's promotion is part of the Galaxy Gifts Package, a collection of free software from its own app store, and will give users access to titles from OnLive's PlayPack bundle, such as Batman: Arkham City, Darksiders, Rogue Legacy and many more. The OnLive service is typically $9.95 per month -- so not only do you save some cash, but also have the chance to try it without any attachments. Once you have your Note 4, the OnLive app can be downloaded from the Galaxy Apps shop.

In this article: Galaxy Note 4, GalaxyNote4, mobilepostcross, Note4, OnLive, OnLive Game Service, onlive-game-service, OnliveGameService, Samsung, Samsung Galaxy Note 4
All products recommended by Engadget are selected by our editorial team, independent of our parent company. Some of our stories include affiliate links. If you buy something through one of these links, we may earn an affiliate commission.