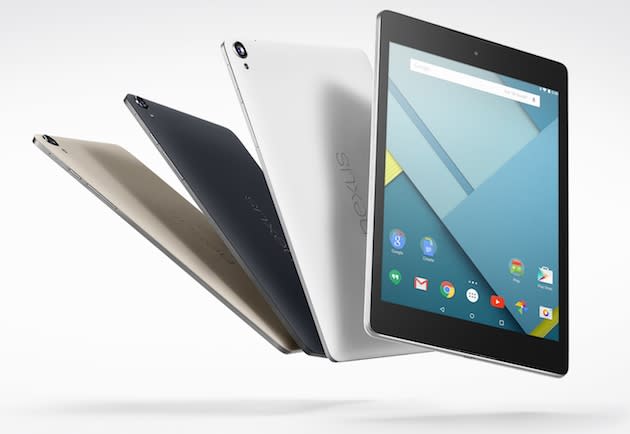 Google may have finally made its latest Nexus devices official, but it's kept UK pricing for the Nexus 6, Nexus 9 and Nexus Player under wraps. Fortunately for us, Amazon is keen to highlight that it'll range the 8.9-inch HTC tablet, and has now started taking pre-orders for both black and white variants of the device before they've even appeared on Google's Play Store. The online retail giant has revealed that the 16GB Wi-Fi model will cost £319, with its 32GB counterpart coming in at £399. After the 4G-equipped 32GB Nexus 9? Expect to pay £459 for the privilege. If you decide to take the plunge today, Amazon says it will get it to you by November 3rd. Unfortunately, Amazon nor Google have confirmed UK pricing for either the Nexus 6 or the Nexus Player, but we'll bring you the very latest as soon as we get it.

Update: It didn't take long for Google to get in on the act: the search giant has now opened Nexus 9 pre-orders on the Play Store. The prices are the same and Google says shipments will leave its warehouses "in 2 - 3 weeks."

In this article: amazon, google, htc, mobilepostcross, Nexus9, uk-feature
All products recommended by Engadget are selected by our editorial team, independent of our parent company. Some of our stories include affiliate links. If you buy something through one of these links, we may earn an affiliate commission.