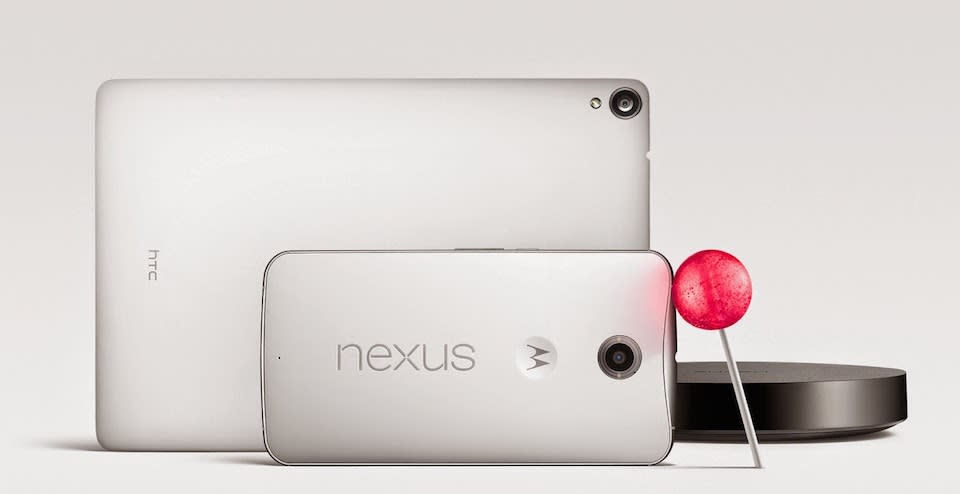 Today's the day Google fans have been waiting for: the announcement of this fall's Nexus lineup. It's essentially an annual tradition at this point, since the last few Nexus devices have arrived at the same time of year. Along with a 6-inch smartphone and a media streamer called the Nexus Player, Google's introduced an 8.9-inch tablet built by HTC aptly called the Nexus 9. This slate, which is available for pre-order this Friday and in stores on November 9th, starts at $399 for the base 16GB WiFi model; $479 for the 32GB WiFi; and $599 for a 32GB LTE variant that comes packed with penta-band HSPA+, quad-band GSM/EDGE and CDMA. As is often the case with brand-new Nexus phones and tablets, the 9 is among the first to get the latest version of Android -- in this case, it's Android 5.0 Lollipop.

The Nexus 9 will be the first in the lineup to come with 64-bit support, thanks to the dual-core 2.3GHz NVIDIA K1 chipset inside. You'll also get 2GB of RAM; an 8MP rear-facing camera with autofocus, BSI and f/2.4 aperture; a 1.6MP selfie camera; dual-band WiFi 802.11a/b/g/n/ac; and a 6,700mAh battery. HTC was also able to slide in its signature BoomSound stereo speakers, which have been impressive on its flagship devices. Sadly, wireless charging isn't included. The 7.9mm-thick slate will be available in black and white and weighs in at 425g (436g for LTE). As for the external appearance, it actually looks a bit like an enlarged version of the Nexus 5, but with brushed-metal sides. The display, covered by a slab of Gorilla Glass 3, also takes advantage of a 4:3 aspect ratio, rather than 16:9, and features a double tap to wake option. Unfortunately, at a resolution of 2,048 x 1,536, the N9 has a pixel density of 281 ppi, which is a bit lower than expected. Google hopes to make up for it in productivity, however, as Google and HTC have designed a keyboard folio case that attaches to the Nexus 9 magnetically.

In this article: android5.0, androidL, google, googlenexus9, htc, htcnexus9, mobilepostcross, nexus, nexus9, volantis
All products recommended by Engadget are selected by our editorial team, independent of our parent company. Some of our stories include affiliate links. If you buy something through one of these links, we may earn an affiliate commission.