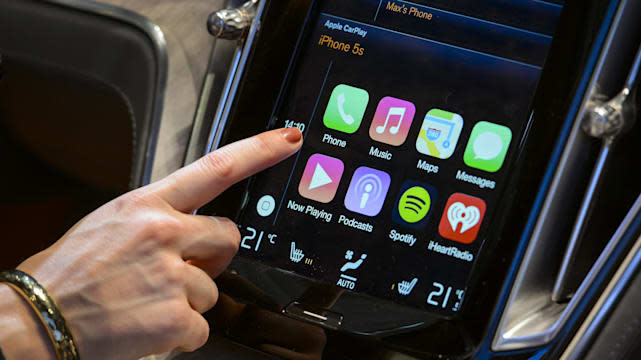 If you have a car and an iPhone, chances are they already know each other. CarPlay builds on the iPod interfaces that are available on nearly every new model. It's not a direct mirror of your iPhone, but a tailored set of apps with a pared-down feature set.

Plug in your phone, and CarPlay highjacks the center screen. Most of the partner brands promising CarPlay use touch screens, so swiping and tapping will be just like on the phone. A few, namely the Germans, use buttons and knobs instead-Mercedes with its COMAND interface, BMW with iDrive and Audi with MMI. The screen layout will be the same in every model, independent of automaker, adapted to whatever size display is in the car. Voice commands should work just like they do with Siri Eyes Free.

The main apps include CarPlay-ized versions of Phone, Music, (Apple) Maps, Messages and Podcasts. A Home button lives in the corner, and a Now Playing shortcut brings up the current audio. Once third-party apps become CarPlay-friendly-Spotify is the first-they'll show up on the Home screen. Should you want to get back to the car's own system, a branded app (really just a button) will take you there.

A lot of this functionality is already available to new-car buyers, albeit without the familiar Apple interface. Various infotainment systems can talk to smartphones through tethered apps, too-like brand-specific apps and iHeartRadio. CarPlay is the next step, a sort of killer tethered app.

Because automotive product cycles are long, it takes a while to integrate the latest technology; a new model going on sale today has been in the works for a while, and major changes come every three years or so. iPhones, on the other hand, show up annually, with iOS updates adding new features in between. So CarPlay should continue to evolve and improve, and when you hook up your new iPhone 7S in a few years, it'll be like getting a higher-powered infotainment system, no invasive car surgery required. Now, about that tether. CarPlay won't let you cut the cord. It requires a Lightning cable connection, which also means it's only compatible with iPhone 5 models and up. This at least guarantees constant power. Good luck finding somewhere to stash that 6 Plus, though.

Another slight bummer: CarPlay probably won't save you money on your next new-car purchase. No company has announced a dumb head unit that will let the iPhone be the sole brains of the operation -- think Mac mini's BYODKM (bring your own display, keyboard, mouse) philosophy. It's feasible, but automakers still want to get paid, and a navigation system bundled with a big screen is still an easy couple grand.

Now the big question is when. Ferrari started delivering CarPlay-equipped models in September, making good on its claim that the gorgeous all-wheel-drive FF hatchback would be first to market with the new tech. (Eddy Cue, an Apple SVP and Ferrari board member, likely had something to do with that.)

In the aftermarket, Pioneer made its NEX line of head units CarPlay-capable through a recent firmware update. Alpine has also promised CarPlay compatibility. Like those pre-installed in new cars, these units are expensive, already capable of navigation and plenty of other stuff. The advantage is you can put one in almost any car, and right now. The downside is a lower level of integration; they often don't talk to the steering-wheel controls of factory systems.

As for the rest, Apple promised CarPlay for select models in 2014. In car-speak, that translates to 2015 models, most of which will go on sale this fall. But a CarPlay-compatible car you buy tomorrow won't be CarPlay-capable until it gets a software update, likely provided free of charge at the dealer once it's available. Like most things Apple, we probably won't know when CarPlay will show up in mainstream models until about the time it does.

We'll have a review once we get our hands on a CarPlay-equipped model.

In this article: analysis, autos, car, CarPlay, cars, entertainment, features, iOS, iPhone
All products recommended by Engadget are selected by our editorial team, independent of our parent company. Some of our stories include affiliate links. If you buy something through one of these links, we may earn an affiliate commission.