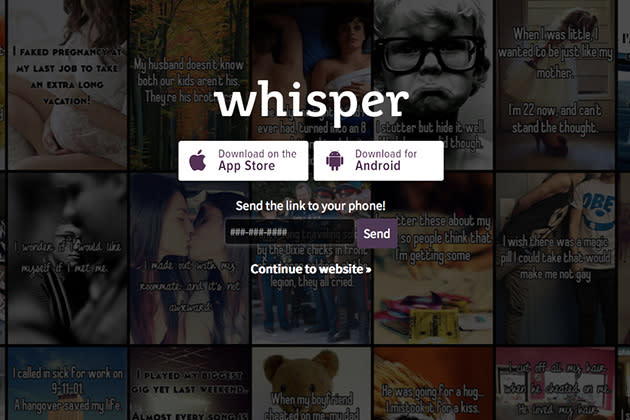 Whisper lets you share secrets without the fear of it getting traced back to you. At least that's the pitch. Now, according to a Guardian report, the service is tracking the location of users that didn't want to be tracked. The report, which deep dives on several issues regarding user privacy and security, adds that Whisper is apparently also sharing info with the US Department of Defense and is retaining posts and user data in a searchable database. Responding to the claims, Editor-in-chief Neetzan Zimmerman says that Whisper "neither receive(s) nor store(s) geographical coordinates" from users who opt out of geolocation services. "User IP addresses may allow (a) very coarse location to be determined to the city, state, or country level."

The Guardian says that four days after learning about the report, Whisper changed its terms of service, allowing the company to establish the broad location of people who have disabled the app's location feature. According to Zimmerman: "Even for users who opt into geolocation services, the location information that we do store is obscured to within 500 meters of their smartphone device's actual location." However, to that end, Whisper also has its own in-house mapping tool that allows staff to filter through location data, pinpointing users to that aforementioned 500-meter area. Given the temporary, anonymous selling point of the app, users might have thought that anything they post would soon disappear into the ether... but the report suggests that "data, which stretches back to the app's launch in 2012, is being stored indefinitely." Zimmerman's response: "Whisper may retain posted content for a brief period of time as stated in our terms of service, however, the internal database contains no personally identifiable information and is secure/access-audited, and not publicly accessible" -- which doesn't quite address what some users are probably taking issue with. You can find The Guardian's report here, and Whisper's rebuttal to some of the points is right over here.

In this article: anonymous, app, dod, geolocation, guardian, identity, privacy, security, whisper
All products recommended by Engadget are selected by our editorial team, independent of our parent company. Some of our stories include affiliate links. If you buy something through one of these links, we may earn an affiliate commission.