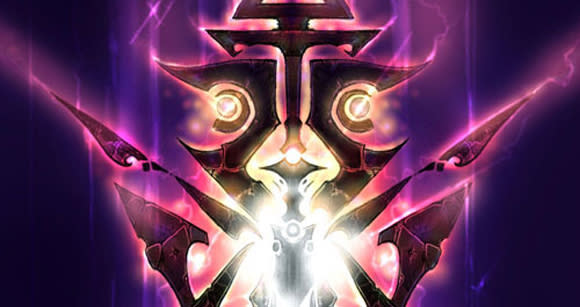 First featured in the Burning Crusade expansion, the enigmatic naaru have been a constant, benevolent life-force in World of Warcraft -- strange creatures with some sort of eternal crusade against the darkness of the Legion. It was the naaru that saved Prophet Velen and his people when they were on the cusp of being claimed by the dark promises of Sargeras, the naaru that helped them flee, the naaru that taught them the Light. And it was the naaru who seemed to be playing a much, much longer game than anyone else, when Burning Crusade reached its end and the full scope of M'uru's plan was revealed.

Burning Crusade marked the second known occasion that the naaru willingly stepped into the lives of mortal races to pull them away from darkness and reach salvation -- although it's entirely possible they have done this before with other races, on other worlds we've never seen. This has always been presented as the noblest of causes. Yet despite all these altruistic actions, we really know very little about the naaru, where they came from, or ultimately why it is that they feel they must fulfill this task. Yet while Warlords of Draenor largely concerns the orcs and the Iron Horde, there are still a few clues -- just enough to expand that perception of the naaru a little more and raise a few more questions in the process.

Today's Know Your Lore is a Tinfoil Hat edition. The following contains speculation based on known material. These speculations are merely theories and shouldn't be taken as fact or official lore.

Here's what we know about the naaru: they are fighting a crusade that they have quietly been drawing other races into for at least 25,000 years, if not far longer than that. They have always presented themselves as enemies of the Burning Legion, intent on forming a massive, all-encompassing Army of Light to fight back against the Legion and rid the universe of its darkness once and for all. One has to assume then, that the naaru began fighting this cause at some point after Sargeras fell -- but not too long after, because he recruited the eredar fairly early on, in the grand scheme of eternal universal plans.

Before that? Who knows what the naaru were. They don't have conventional bodies, instead composed of what seems to be pure Light. Evidence points to exactly that, as the naaru M'uru was captured and drained of its Light by the blood elves, to fuel their new, warped version of paladins in the Burning Crusade. They siphoned the Light from M'uru almost like a battery or generator, bending it to their will in a way that was pretty much the antithesis of the methods and practices that are usually taught to paladins.

In the end, that seemed to be M'uru's plan all along.

A'dal : Both our peoples suffered greatly at the hands of Kael'thas and his agents, Lady Liadrin. Your people were not the authors of their own fate, but they will die if they do not change. M'uru accepted his role in this long ago, knowing full well what would happen to him. Will you accept your own?
Lady Liadrin: I... I don't understand. You -- and M'uru -- knew all along that this would occur?
A'dal: It wasn't I who foretold it, but Velen of the Draenei: 'Silvery moon, washed in blood, Led astray into the night, armed with sword of broken Light. Broken, then betrayed by one, standing there bestride the sun. At darkest hour, redemption comes, in knightly lady sworn to blood.'

What's interesting here isn't the prophecy, although it's strange that Velen would see a future involving a race he'd scarcely begun to know. What's interesting is what A'dal states before the prophecy: "Your people were not the authors of their own fate." He could be speaking, of course, of the Scourge assault that decimated the elven race and destroyed the Sunwell. He could be speaking of Kael'thas Sunstrider, and the fact that he sent M'uru to Silvermoon, encouraged his people to siphon magic, even fel magic, to survive.

Or maybe he's talking about a much longer skein of fate, one that began when the Burning Legion was first conceived.

What else do we know about the naaru? When they are damaged, when they are dying, they sink into a void state that is nigh-impossible to claw out of. As we've seen, there are a few different courses of action they can take -- they can regenerate, eventually coming back to the Light, or they can become wholly consumed by the darkness and transform into a creature of the void. We've seen it happen on at least one occasion first hand, when a darkened M'uru turned into the void god Entropius. We see it again, in Warlords of Draenor. It's been said that this is a rare thing to see with the naaru -- death is not common at all.

This is where we leap into tinfoil hat territory, because the key to the naaru and their crusade against the darkness may in fact lie in their life cycle. We know nothing of the world the naaru came from -- we know nothing of how they originally knew of Sargeras' fall. This leaves a few possibilities to think about right off the bat, the first and most likely being that Sargeras came to the naaru's world, wherever it might have been, and made them the same offer he made the draenei: Serve the Legion, gain untold power, rule the universe.

Perhaps there were those that joined -- and that's why the Burning Legion and the Twisting Nether are both riddled with void creatures, great and small. Those aren't creatures of the void. Those are the maligned remnants of the naaru, their Light consumed and instead replaced by eternal darkness and an unwavering desire to feed. Loyal servants of the Burning Legion, all -- and that's why the naaru were so quick to answer Velen's plea, unwilling to let the same fate happen to someone else.

Or maybe it runs a little deeper than that.

We explored the apparent life cycle of the naaru in a recent Know Your Lore, and considered the possibility that perhaps naaru regeneration -- the rebirth of the naaru, after they have been damaged -- depends on the Light. If the Light is being practiced, or if those dead souls are the souls of those who have given themselves over to the Light, this seems to be the case. If the souls are not Light-practicing creatures, as with the case of K'ure and the souls of orc ancestors in Oshu'gun, then the naaru neither regenerates nor falls completely into the void, simply fading away over time. Prophet Velen sacrificed his own life to jump-start a naaru back to health in Shadowmoon Valley -- how he was able to do so hasn't been clearly defined.

But the question then becomes: Did the naaru teach the draenei the way of the Light in order to recruit them into an Army of Light? Or did they teach the draenei the Light in an effort to bolster their forces and provide some kind of insurance in the event that one of their dwindling numbers happened to fall? Not as an act of malevolence, simply a clinical action designed to bolster the dwindling numbers of an alien species we don't comprehend. In exchange for our subservience to the Light, we get the powers associated with it.

Are there two parts to the Army of Light? Obviously yes, there is an aspect in which we are expected to fight the Burning Legion and win, the naaru seem set on that just as single-mindedly as Sylvanas was set on seeing the Lich King destroyed. But are we also tools for the naaru, insurance in the event that one of them is slain, a method to prevent them from descending wholly into the void and instead, in an extreme twist of fate, save themselves from certain destruction? Does our practice of the Light merely inspire hope, benevolence and warmth within those around us -- or is it also a lifeline for a species we hardly know and barely understand?

And so we begin to see a waterfall effect, where Light begets Light from creature to creature, race to race, pulling together anyone who has been remotely affected by the Legion and bolstering them into creatures that can not only withstand the void, but reverse its effects. To us, this is the ultimate battle of good vs. evil. To the naaru, however ... to the naaru, this is simply an echo of a life cycle that has always been in place. A long game, one meant to yes, spread benevolence and Light across the universe, but at the same time do the necessary job of keeping the naaru alive and well.

If this is the case, are the naaru really fighting the Burning Legion at all? Was there a moment in which Sargeras came to these creatures and offered them power in exchange for their servitude? Or did Sargeras simply become part of that cycle, a dangerous reflection of what the naaru could become, an infection that needed to be excised before it could spread too far?

Perhaps the naaru aren't really fighting the Legion at all -- perhaps this is simply an expansive, universe-encircling game in which the naaru have been pitted against the darkness in themselves. A game in which we are not even players necessarily, but tools used to strengthen one half against the other. Wardens of all that is good, yes ... but also the key to the salvation of an alien race who has offered us our own in exchange.

While you don't need to have played the previous Warcraft games to enjoy World of Warcraft, a little history goes a long way toward making the game a lot more fun. Dig into even more of the lore and history behind the World of Warcraft in WoW Insider's Guide to Warcraft Lore.
In this article: adal, blood-elves, burning-legion, featured, guide, guide-to-lore, kure, light, lore, lore-guide, muru, naaru, role-play, role-playing-guide, rp-guide, sargeras, velen, warlords-of-draenor, world-of-warcraft-lore, wow-guide, wow-lore, wow-role-playing, wow-role-playing-guide, wow-rp, wow-rp-guide, wow-rping
All products recommended by Engadget are selected by our editorial team, independent of our parent company. Some of our stories include affiliate links. If you buy something through one of these links, we may earn an affiliate commission.