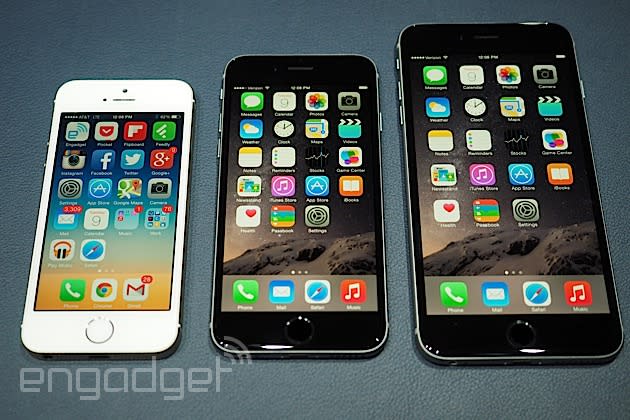 Apple just dropped its 4th quarter earnings a few moments ago, revealing that the folks in Cupertino raked in $42.1 billion in revenue and $8.5 billion in pure profit -- more than enough to take care what it might owe in back taxes. More interestingly, the company moved a total of 39.3 million iPhones over the past three months, along with 12.3 million iPads and 5.5 million Macs. Word that Apple's mobile business had a bang-up three months is hardly a shock -- a record-breaking 10 million iPhone 6/6 Pluses were sold over its first weekend, which CEO Tim Cook said beat all previous milestones "by a large margin". Here's the thing though: iPad sales didn't just dip from last quarter, they dipped year-over-year, too. In fact, the number of iPads Apple has moved this time around was the lowest since the company started reporting tablet sales separately in 2012.

Now, this by itself isn't necessarily a shock either. Bigger ticket products like the iPad are things that people tend to hold onto for longer, and we've only just seen a new batch of iPads (well, one new iPad and one very mildly tweaked one) make their debut. Stalwarts will say just give it some time, the iPad'll pick up steam again, and it very well may do so -- there's an iPad at nearly every notable price point now. With the launch of a device like the iPhone 6 Plus, though, a device that for many people will ably straddle the line between the iPhone and the iPad Mini, it'll be interesting to see if the iPad manages to regain it's former sales glory. The fact that the iPad Mini wasn't barely touched this year won't help matters -- it got all of what, five sentences dedicated to it during the iPad Air 2's grand unveiling? Sure, part of that is almost certainly due to the cost and complexity of shrinking components and refining design, but the continued (some would say overwhelming) demand for Apple's bigger iPhones may wind up eating away at the iPad's relevance in some very curious ways.

(Brief parting aside: If you want some really interesting numbers, next quarter will factor in the new iPhones' momentum in China, and the one after that will chronicle Apple's typical holiday explosion. We're expecting a doozy.)

Update: Apple's talking iPad on its earnings call right now -- it says this quarter's sales were consistent with its expectations, and apparently did really well in Japan. The iPad also remains the United States' education tablet of choice. Later, during the Q&A session, Tim Cook said Apple looks at this iPad dip as a "speedbump and not a huge thing" and went on to note that he personally sees a "great future" for the company's tablets.

In this article: apple, earnings, financials, ipad, iphone
All products recommended by Engadget are selected by our editorial team, independent of our parent company. Some of our stories include affiliate links. If you buy something through one of these links, we may earn an affiliate commission.