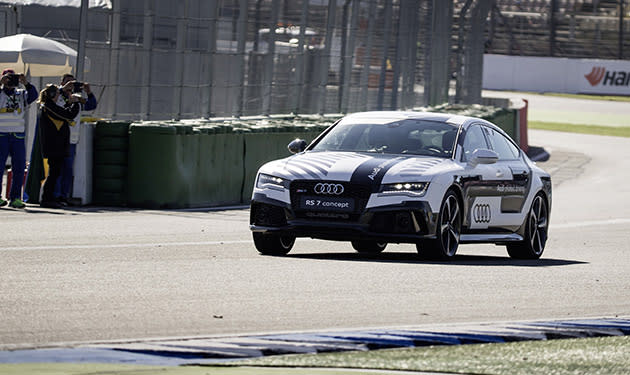 Audi's execs must have toasted to their autonomous car's success this weekend, because the self-driving RS 7 has successfully conquered the Hockenheimring racing circuit in Germany. While the company's announcement doesn't get into specifics, it says the modified sedan finished each lap in just over two minutes, close to the original two minutes and 10 seconds estimate. It doesn't confirm a top speed either, but the commentator in the video after the break says the car reached 137mph, driving the optimal trajectory you'd expect a top racer to take. As we've mentioned before, the automated RS 7 is completely driverless and uses GPS and photos taken by a 3D imaging camera to track its position down to 1 to 2 centimeters -- something it's obviously executed well during the Hockenheimring stunt.

The car that drove around the circuit, though, is just one of Audi's self-driving prototypes named Bobby after race car driver Bobby Unser. There's another one called AJ (named after AJ Foyt), which raced against Slashgear's editor-in-chief before the event. According to Slashgear, engineers can dial down the car's performance, depending on weather or track conditions. At 86 percent performance driving on a wet race track, the car finished a lap in two minutes and 10 seconds, while at 93 percent on a dry track, it was done in merely two minutes and a second. Audi hasn't revealed if it plans to develop models people can buy just yet, but says piloted driving is "one of [its] most important development fields."

In this article: audi, autonomous, car, race, rs7, self-driving car, Self-drivingCar
All products recommended by Engadget are selected by our editorial team, independent of our parent company. Some of our stories include affiliate links. If you buy something through one of these links, we may earn an affiliate commission.