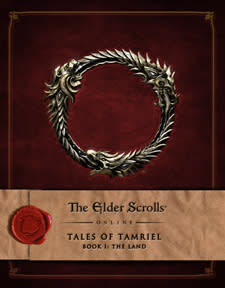 Why have Elder Scrolls Online only on your gaming machines when you can also have it on your bookshelves? Bethesda has partnered again with Titan Books to create two new series that delve deeper into the world of Elder Scrolls, one focusing on ESO and the other on Skyrim. A March 2015 release date is planned for the first volume of each series.

The Elder Scrolls Online – Tales of Tamriel will be split into two volumes, the first titled The Land and the second, The Lore. Both will expound even further on the lore of the game and feature never-before-seen art.

The Elder Scrolls V: Skyrim – The Skyrim Library consists of three volumes (The Histories; Man, Mer and Beast; and The Arcane) that moves the all of the game's in-game text to out-of-game print that players can grab and read at their leisure.

In this article: bethesda, bethesda-softworks, bethsoft, books, daggerfall, elder-scrolls, elder-scrolls-online, ESO, factions, lore, morrowind, new-books, oblivion, pvp, rvr, skill-based, Skyrim, tamriel, tes, TESO, the-elder-scrolls, the-elder-scrolls-online, three-faction-pvp, three-way-pvp, zenimax, zenimax-media, zenimax-online, zenimax-online-studios
All products recommended by Engadget are selected by our editorial team, independent of our parent company. Some of our stories include affiliate links. If you buy something through one of these links, we may earn an affiliate commission.