Adobe Flash Player 10.1 and AIR 2 betas are out, multi-touch and video acceleration are in (video) 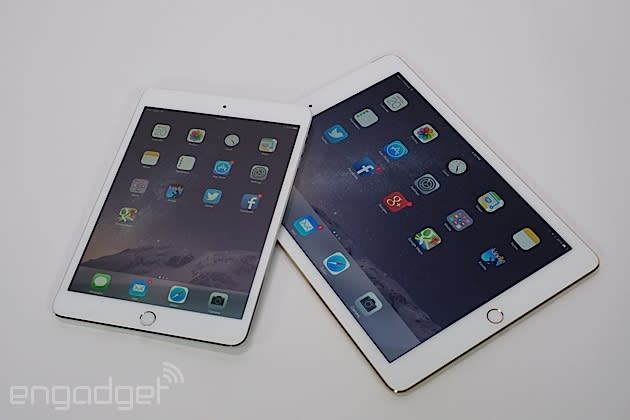 Apple began accepting online orders for the iPad Air 2 and iPad mini 3 shortly after the new tablets were announced last week, but if you'd rather not wait for a delivery, you can pick one up in-store as of today. Apple's own retail outlets now have the new generation of slates in stock, as do select John Lewis locations, including the flagship London Oxford Street, High Wycombe and Edinburgh stores. Be aware this is the very first batch to hit the UK, so shops might not be able to hook you up with the exact hardware configuration and colour scheme you so desperately want. The iPad Air 2 and mini 3 start at £399 and £319, respectively, with prices increasing based on storage capacity and/or the addition of LTE connectivity. If you'd prefer to spread the cost of new iPad across the term of a mobile data contract, O2 and EE are currently accepting preorders for both tablets, with Three and Vodafone saying they'll joining the fray soon.

In this article: air2, apple, appleipadair2, appleipadmini3, ipadair2, ipadmini3, johnlewis, mini3
All products recommended by Engadget are selected by our editorial team, independent of our parent company. Some of our stories include affiliate links. If you buy something through one of these links, we may earn an affiliate commission.