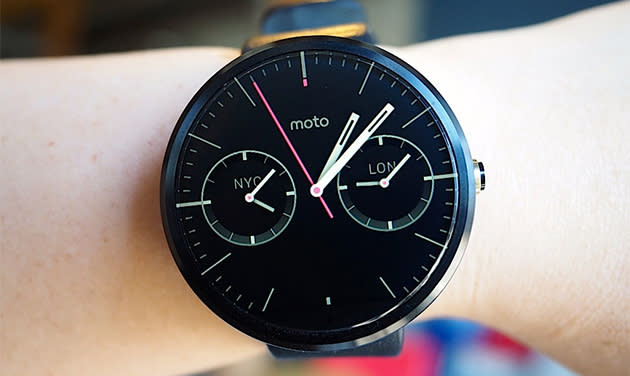 When the Moto 360 last got an update, the painfully handsome smartwatch seemed to get a noticeable boost in battery life. Now, with a new bit of software, Motorola's itching to improve its battery life just a little more... as well as stamp out a few bugs for good measure. Perhaps the most notable addition is the 360's newfound ability to shut off Ambient Mode (which leaves the screen on, albeit at a lower brightness) automatically once its battery level hits 15 percent. Also on deck this time are some minor UI changes (you can temporarily dismiss a notification without leaving the watch face), the addition of mood lighting when you plop the thing in its dock, and some behind-the-scenes Bluetooth improvements. All of the above will be hitting your wrist sooner or later -- Motorola says the update is rolling out in waves, so be patient if your smartwatch doesn't get a little smarter as quickly as you'd like.

In this article: androidwear, google, mobilepostcross, Moto360, Motorola, smartwatch, update
All products recommended by Engadget are selected by our editorial team, independent of our parent company. Some of our stories include affiliate links. If you buy something through one of these links, we may earn an affiliate commission.