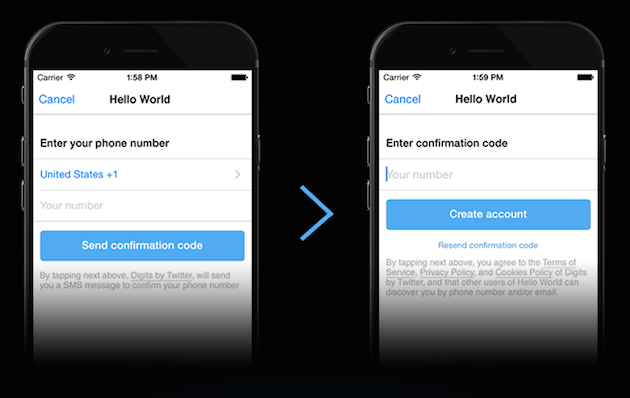 At its mobile developer conference in San Francisco, Twitter just announced Digits, a brand-new way to log in to apps with just your phone number. Instead of going through the tedious process of signing up with an email and password or using one of many different social logins, all you need is to enter in your number. When you do, you'll get a confirmation code via SMS. Enter that in as well, and away you go; no need to remember passwords or go through CAPTCHAs. Digits is not based on Twitter at all; it's actually an entirely new product that developers can incorporate into their apps, be they Twitter-related or not. It's a key part of Fabric, Twitter's new mobile development kit that it's rolling out today. Digits is available for iOS, Android and the web, and it's available in 216 countries in 28 languages right now.

Aside from Digits, Fabric includes several other tools that Twitter hopes developers will incorporate into their existing apps, such as Crashlytics, the crash-reporting tool that the company bought last year, and MoPub, its advertising platform. There's also something called TwitterKit, which finally brings system-level Twitter sign-on to Android, a service that's been on iOS for a while now. This means that you only need to sign on to Twitter once on an Android phone, and you'll be able to easily access all apps that require a Twitter login. Especially of note is that developers can now not only embed tweets in their apps, but also add the ability to compose and post tweets inside of them without having to launch the dedicated Twitter app.

In this article: crashlytics, digits, fabric, mobilepostcross, passwords, poll, twitter, wedgies
All products recommended by Engadget are selected by our editorial team, independent of our parent company. Some of our stories include affiliate links. If you buy something through one of these links, we may earn an affiliate commission.