Latest in Bang and olufsen 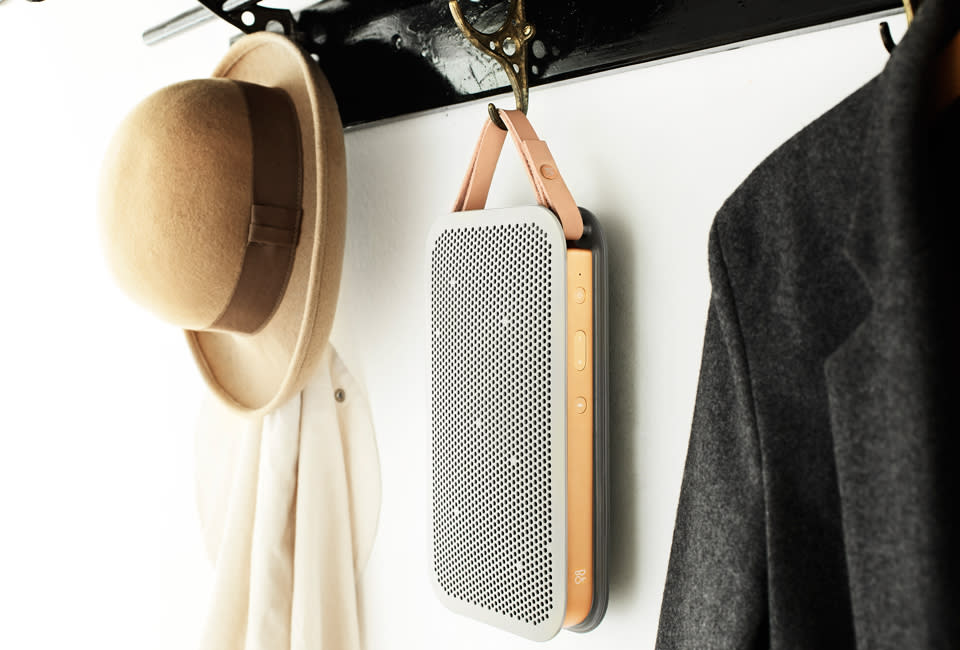 Back in September, at the last press day of German trade show IFA, I should be hauling-ass across the show floor. Instead, I'm waiting outside by the taxi rank, sucking down secondhand smoke of the booth attendants on their breaks and hoping that my ride hasn't forgotten me. Soon after, a pitch-black Audi S8 glides to a halt by my feet, and I know that either the CIA is about to tackle me, or this is my ride to Bang & Olufsen's top-secret, off-site testing area.

The car, it transpires, is not only the most tricked-out ride I've ever been in, but is also part of the demonstration. The Danish audio (and TV) firm having customized the car with a 24-speaker package that's so extreme, the forward speaker cones rise up from the dash when you start the engine. The company is so obsessed with quality control, I learn, that even the aluminum grilles on the door speakers are custom-made in Denmark and then shipped to Audi for installation. Then, we're off through Berlin, leaving the gridlock of the inner city and onto winding roads that lead to warehouses and factories sited next to glass towers and "innovation parks," as old Berlin makes way for its newer, shinier replacement. As I'm marveling at the view, I'm also hearing the demonstration DVD that the company is playing for my benefit, but I'm having trouble enjoying it as I'm laying on a bass speaker that's so powerful I think that it's stopping and restarting my heart every few seconds.

After half an hour or so, we pull up to B&O's secret off-site location, erm, a Holiday Inn that's tucked somewhere on the outskirts of the city. The theatrics might have been undercut a little by the innocuous setting, but it's clear that Bang and Olufsen is twitchy about the latest product in its B&O Play range. Play is the closest that the company comes to a "low end" line, offering top-of-the-line products for smartphone-toting youths and professionals who can't afford to spend several thousands of dollars on speakers. Once the introductions are made, my camera has been signed away and I've signed a non-disclosure agreement that has me on the hook for a sizable fine if I told anyone about what was coming, we're shown into a modest room where the news is finally revealed: Bang & Olufsen is making its first ever portable Bluetooth speaker. Audiophiles like nothing more than to sneer at Bluetooth, saying that the humble wireless standard is nowhere near capable of handling high-definition audio. That's because the data is compressed and some chunks are discarded, so it's not as clear as if you were using a physical line-in connection instead. It's a hard limit for B&O, which instead threw its weight behind WiSA as the standard for its wireless speakers, and used AirPlay for its iOS-suitable devices like the Beolit 12. Search the company website and the only thing you'll find is the support documentation for the old EarSet wireless headset it produced a few years ago. With the advent of aptX, a Bluetooth standard that promises CD-quality audio, the company reconsidered its position, to the point where it's prepared to launch a high-end alternative to Jawbone's Big Jambox, the BeoPlay A2.

So, what has the A2 got that sets it apart from, say, every other Bluetooth speaker ever made? First up, the company realized that while most people take their speakers around with them, they're awkward to fit in a bag. That's why the company made the A2 reasonably skinny and flat. It's nowhere near as portable as B&O believe since it's also pleasingly heavy, but it'd certainly fit into a laptop sleeve in a rucksack a lot easier than other bigger, rectangular devices on the market. The A2 is held together by a single piece of Aluminum milled from a solid block, covered on both sides by a polycarbonate shell that sticks out enough to guard the controls and ports that sit around the edge. Down one side, you'll spot a leather strap that doubles both as a carrying handle and a fashionable accent like other B&O speakers.

There isn't really a defined "up" on this device, since it can be used laying flat, on its longer side or up on its end. It doesn't affect the sound quality any, as the company has been working on "Power Response Enhancement," some digital signal processing secret-sauce that enables the sound to travel "around the corners" in such a way that even when my hands were obscuring both faces, there was no discernible drop in quality. B&O simply hasn't tossed a woofer into a plastic box and called it a day, either, cramming 180 watts into the package with a large woofer at one end, a smaller tweeter at the other and a passive bass radiator sitting in the middle. Even the detailing on the case has been thought out: those blocked-off holes are to prevent your eyes from strobing, which is beneficial to everyone apart from stoners.

Aside from the fact that this is Bang's first Bluetooth aptX speaker, the other headline feature is the battery life, which the company claims will last for 24 hours. In fact, in the labs, the company's managed to eke out 30 hours at lower volumes, but expects that 24 will be the experience found by most users. There's also a USB port, enabling you to share some of that power with your smartphone or tablet when you're on the go. Unfortunately, despite this being a portable Bluetooth speaker, it's very much the Niles Crane of the industry. There's no waterproofing or other hardy claims being made here, and the only promise is that the A2 is sprinkle-and-drop resistant. Given that there's a cloth lining lurking just beneath the polycarbonate shell, the company doesn't advise you take this to the beach, well, unless you build it a small throne well out of the way of any water, sand or dirt.

The A2 also doesn't come out well in a spec-by-spec fight with its most obvious rival, since B&O didn't fit the device with a Bluetooth speakerphone. When we asked, we were told that adding such optional fripperies would "throw the value of the device," and the company would prefer to spend all of its money on ensuring you get the best sound available. We also asked, given the size of the hardware, if it could handle DSS, and it's something that's being considered for a future firmware update that you'd install via the same USB port.

Of course, you're curious as to how it sounds. You have to remember that this was a controlled demonstration by a high-end audio company on their (temporary) home turf. If the A2 didn't have a beautiful, spine-tingling, room-filling sound here, then B&O might as well call it a day. Facetiousness aside, the A2 is clearly punching well above its own weight, and a look back at my notes you'll find a blank space, followed by a "wow" in capital letters. Take it with a pinch of salt, but on the surface, this looks like the sort of device you'd use as your primary home speaker, let alone one you'd take on the road. The BeoPlay A2 is available in three colors: Burnished Gold, Camouflage Green and a truly unspectacular Black. I mention this only because the Black looks nowhere near as good as the other two finishes, with the paint job obscuring the beautiful metal and plastic finishes and texture you can feel in the hand. When we raised this with the company, it seemed to be something that they were resigned to. Despite offering a wide variety of beautiful, nuanced color options for its gear (there's different-colored leather straps in various lengths that'll go on sale with the A2), the traditionalist hi-fi buying public tends to stick with what they know - and what they know is black. Still, if you're feeling adventurous, you can snag one of these for $399/€350/£299 from today, and we'll be getting one of these in as soon as we can to see if it sounds as good in the real world as it did in B&O's hotel room.

In this article: Bang and Olufsen, Bang and Olufsen Play, BeoPlay, BeoPlay A2, BOPlay, hands-on
All products recommended by Engadget are selected by our editorial team, independent of our parent company. Some of our stories include affiliate links. If you buy something through one of these links, we may earn an affiliate commission.