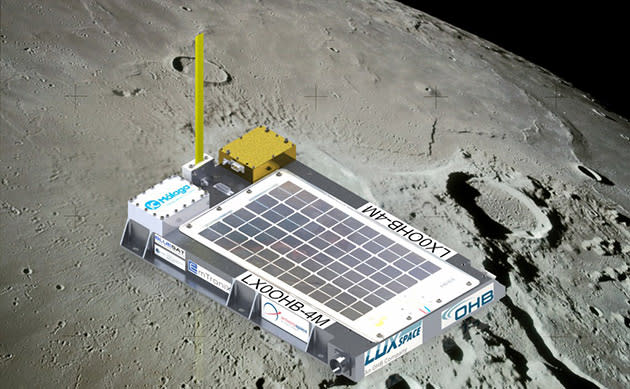 A Chinese Long March rocket has blasted off for a lunar flyby today, bringing with it a spacecraft for what claims to be the first privately funded mission to the moon. This spacecraft (attached to the rocket's upper stage) is a 31-pound vehicle called 4M manufactured by Luxembourg-based company LuxSpace. 4M will be broacasting signals throughout the duration of its journey (it has already started doing so), and anybody on Earth is welcome to try and receive/decode those messages. In fact, the company wants to encourage radio amateurs (even you) to join in by holding contests later on -- just check out 4M's mission page for clues on where to begin.

The Chinese rocket's main payload, however, is the Chang'e 5-T1 lunar spacecraft, which it's dropping along the way, so it can zoom back down to Earth. It was made as a test capsule to ensure that the re-entry technlogy for the Chang'e 5 unmanned mission works before it officially begins in 2017. That mission aims to collect rocks and soil from the moon, and then ferry them back to the planet without a human on board. While the test capsule will soon make it back to our planet, both 4M and the Long March rocket will remain in space for a while longer to travel in a circle around the Earth. LuxSpace expects the 4M mission to last for eight days, but you might be able to receive signals from the vehicle longer than that, depending on how long its solar cells can sustain it.

In this article: china, luxembourg, moon, space
All products recommended by Engadget are selected by our editorial team, independent of our parent company. Some of our stories include affiliate links. If you buy something through one of these links, we may earn an affiliate commission.