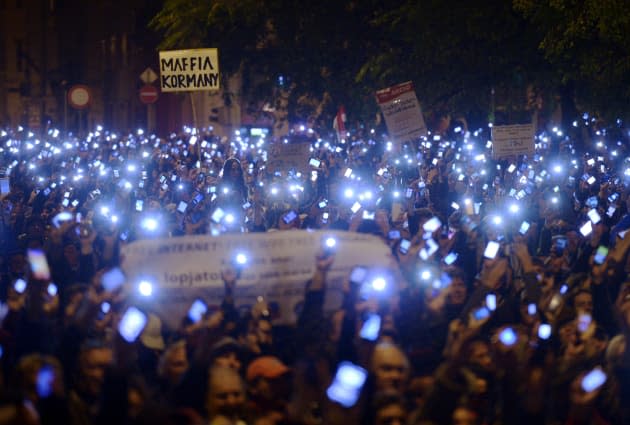 Hungary needs cash, so it seemed like a pretty clever idea to tax that most necessary of utilities: the internet. Unfortunately, while the notion may have gone down well with the nation's accountants, the feeling wasn't shared amongst the general population. That's why tens of thousands of Hungarians spent Saturday night protesting in Budapest. According to the Wall Street Journal, the people also believe that the tax is an attempt to limit access to information and keep everyone watching state-run media. It's not just the local internet fiends who are up in arms, either, since Europe's digital chief, Neelie Kroes, took to Twitter to call the move a "shame on the Hungarian government." For its part, Hungary's government affirmed a pledge to cap the tax at 700 forints (around $2.88) a month, and pointed out that it's the ISPs that are meant to pay, not the households. That said, we wouldn't be surprised if the companies didn't start putting a 701 forint surcharge on the next few bills with maintenance, or something in the description.

Proposed internet tax in #Hungary is a shame: a shame for users and a shame on the Hungarian government. I do not support!

In this article: Hungary, Internet Tax, Neelie Kroes, Protests
All products recommended by Engadget are selected by our editorial team, independent of our parent company. Some of our stories include affiliate links. If you buy something through one of these links, we may earn an affiliate commission.