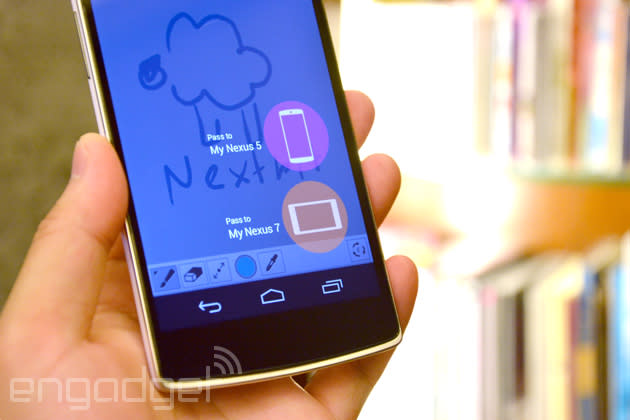 You may just about recall that Nextbit, a startup formed by ex-Googlers, has been collaborating with Cyanogen on a "really cool" secret project. As it turns out, this is all about the continuity experience across Android devices -- very timely given the recent launch of OS X Yosemite and iOS 8.1, which boast a set of continuity features. Nextbit's offering is dubbed Baton, and as the name suggests, it lets you quickly pass an app's state from one Android device to another, meaning you can continue playing on the same level in a game, editing the same document in an app or browsing the same web page right away; with the precondition being the second device must also have Baton and the same app installed. Better yet, app developers don't have to do anything at all; existing apps should just work.

To toggle a pass, simply hold down the "Recent Apps" Android soft key and then choose your desired target device. In a matter of seconds, the target device will wake up and launch the same app in the same state. Similarly, you can do the same to pass the app to the previous device or to a new one -- provided that it's already associated with your CyanogenMod account, running Baton and has the identical app installed. In the case where the passed app isn't yet installed, the OS will prompt you to download it. The more we look at this, the more we wonder why didn't Google come up with this.

"We've taken the cloud and we've deeply integrated it into the OS itself," Nextbit CEO Tom Moss said proudly.

Interestingly, Nextbit's Baton somewhat contrasts with iOS' Handoff by getting the user to "push" an app's state to a target device, as opposed to pulling an app onto one's selected device. Different initiations, but similar ideas. That said, Handoff only works on iOS and OS X apps that use its APIs (which isn't surprising given the cross-platform nature), whereas Baton has the advantage of requiring literally no dev work at all.

Don't be mistaken: Baton isn't an app that you download from the Play Store. Rather, it's a framework that utilizes the cloud to keep apps and data constantly in sync across multiple Android devices. And since the state of the apps plus the UI's look and feel are backed up daily, Baton also lets you restore to your desired moment. In fact, this particular part of Baton is already being shipped as a white label product on Japan's NTT Docomo devices as of last week, and Nextbit is in talks with Chinese OEMs to spread the love further.

OnePlus One will definitely be getting Baton.

Likewise, Baton will only be available on devices made or sold by licensees, and Moss said he's getting a pretty good momentum in terms of establishing partnerships. This feature is currently only available to select testers who are running the latest version of CyanogenMod, though Nextbit will soon be launching an invite-only beta program. We're also told that Baton's first public release will debut on the "commercially distributed Cyanogen operating system" at some point this year; and yes, this means the popular OnePlus One will definitely be getting Baton.

But this is only just the beginning for Nextbit. Seeing that 50 percent of smartphone users run out of storage within the first 12 months, the startup's next goal is to enable "limitless" storage -- local storage and cloud storage combined as one -- on Android devices. The team of Google, Apple, HTC and Amazon alumni didn't dive into details since they are in talks with a carrier partner, but on paper it's simple: This is achieved by intelligently moving data between local storage and the cloud, so the user wouldn't notice a thing. Well, as long as you have data connection, that is.

"It's all about solving the real pain points on our mobile devices," Moss added.

In this article: android, baton, continuity, cyanogen, cyanogenmod, mobilepostcross, nextbit, oneplusone, scottcroyle, tommoss, video
All products recommended by Engadget are selected by our editorial team, independent of our parent company. Some of our stories include affiliate links. If you buy something through one of these links, we may earn an affiliate commission.