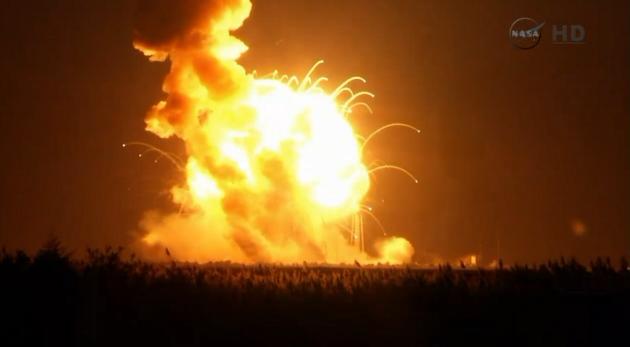 The Orbital Sciences Antares rocket attempted to take off this evening at the Wallops Flight Facility (yesterday's attempt was scrubbed due to a boat that wandered into a restricted area), but it exploded just six seconds after launching. In a tweet Orbital Sciences confirmed a "vehicle anomaly", and NASA says the company is evaluating the mission. There was no crew on board as it was intended to be Orbital's third unmanned resupply mission for the ISS, carrying some 5,000 lbs of food, supplies and science experiments, like the Radiometer Atmospheric CubeSat Experiment (RACE) and 26 Flock 1d satellites from Planet Labs. One thing that was not onboard was the Kickstarter-backed ARKYD telescope -- this mission was carrying an A3 spacecraft intended to test out the equipment that ARKYD will use next year. Orbital Sciences is the second private company -- after SpaceX -- that runs missions to the ISS, and its Cygnus spacecraft made the first successful delivery about a year ago. NASA's live stream from the launch pad is embedded after the break, as well as a video replay of the failed launch.

Update: Orbital Sciences says it has "formed an anomaly investigation board" to figure out what went wrong. EVP Frank Culbertson said that while the company focuses on the safety and security of those involved in recovery operations, "As soon as we understand the cause we will begin the necessary work to return to flight to support our customers and the nation's space program." NASA and Orbital are planning a press conference that will begin at 8:45PM ET, streaming on NASA TV. You can watch here, or in the embedded player after the break.

Update 2: During the press conference, NASA said that the ISS is in good shape regarding its consumables (food, water), with supplies that will last into "well into" next year, perhaps as far as March. If anyone finds debris from the explosion they should stay away from it and call 757-824-1295 to pick it up. Orbital's Culbertson stated that right now, what they know is the same thing we've all seen on video. The ascent stopped, and there was "some disassembly" of the first stage, before the range safety officer sent the command to self-destruct.

The team on the ground has confirmed there are no injuries, although because of "classified crypto equipment" onboard, it is in the process of securing the surrounding area. It's not clear what caused the explosive failure, but some have already pointed out that Orbital is using AeroJet Rocketdyne AJ-26 engines for its first stage. According to Spaceflight Insider, those rockets were built over 40 years ago in Russia before being imported, refurbished and upgraded for use with Antares. One failed on the test stand earlier this year and another did the same in 2011, apparently due to "stress corrosion cracking." SpaceX founder Elon Musk tweeted that he was "sorry to hear" about the launch, a sharp turn from two years ago when he told Wired that that Orbital's plan to use rockets built in the 1960s "honestly sounds like the punch line to a joke." Two weeks ago, SpaceX announced the completion of its 100th brand-new Merlin 1D rocket engine.

There has been a vehicle anomaly. We will update as soon as we are able.

NASA & @OrbitalSciences are gathering data on the failure of the CRS-3 mission 6 seconds after launch. Updates: http://t.co/6Bo6KBRWnG

In this article: antares, arkyd, breaking news, cygnus, explosion, iss, nasa, orbitalsciences, rocket, spacecraft, video
All products recommended by Engadget are selected by our editorial team, independent of our parent company. Some of our stories include affiliate links. If you buy something through one of these links, we may earn an affiliate commission.