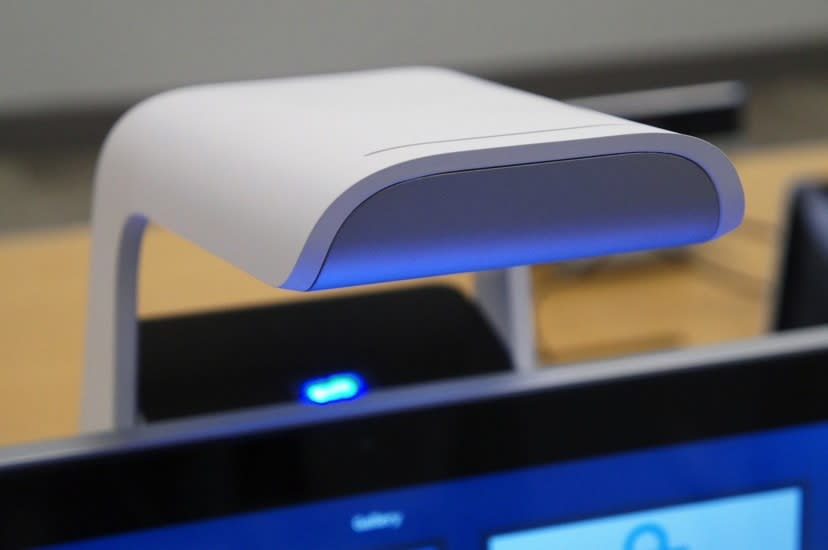 The best way to describe Sprout, an ambitious new desktop from HP, is that it's unlike any PC the company has ever made. The second-best way: It's an all-in-one computer with a touch mat that acts as a second screen, and an overhead projector/camera that can scan 3D images. It starts at $1,899, and ships next month. In short, it's a workspace that attempts to blend the digital and physical worlds, and it was built specifically for people doing creative things. That includes advertisers and designers and other professionals, but HP's also hoping that a certain kind of consumer will appreciate this. Photo enthusiasts, perhaps, or maybe makers. Basically, if you do things with your hands, you might have a use for Sprout. At its core, Sprout is a Windows PC, but HP has also added custom software to make it easier to manipulate things with your fingers, or even introduce real-life elements -- a page you clipped from a magazine, for instance. There are actually a few custom apps here, but the one where you'll be spending the most time is Workspace. It's exactly what it sounds like: a repository for all your stuff, whether that be photos, documents, videos or anything else. It's always a side-swipe away on the Windows desktop, but you can also arrange it as a Live Tile, if that suits your setup better.

Naturally, you can use Workspace to play with media on the machine's 23-inch, 1080p screen. But the touch mat also works as a display, thanks to a built-in projector on top of the computer that beams images down onto the 20-inch work surface. With a soft, flexible feel, it's kind of like a blown-up mousepad; when it's unplugged from the computer, it could also double as an old-fashioned blotter. With 1,024 x 768 resolution, it's not ideal for doing fine photo edits, but it's more than enough for hitting game controls, completing jigsaw puzzles and sifting through photos with your hands. So how do you get all that content onto the pad? You can simply flick files down from the main screen using a swipe of your finger. Wanna manipulate photos? Just flick 'em down to the touch mat from inside the Workspace app. From there, you can move objects around, resize them and zoom in using multiple fingers. (Though the mat looks like a retro touch pad, it actually supports 20 simultaneous touch points, just like a touchscreen display.) And because the mat has a slightly textured surface, it has a more tactile feel than your typical, slick LCD panel.

I've mentioned gaming already. Indeed, the second screen will come in handy for things like flight simulators or maybe racing games. Who knows? Maybe even first-person shooters. Whatever the game, though, you'll find the controls on the lower screen, with gameplay running at full-screen on the main display. HP also built in a soft keyboard, which you can bring up using a capacitive button on the base of the machine. Another possible use cases: a music app called Pianotime, which puts the keys on the lower screen and the sheet music up top. In any case, more applications are likely on the way: HP is opening its SDK to developers today, so assuming devs find Sprout as interesting as we do, you should see some more custom software sooner rather than later. This is where things get weird. In addition to a projector that beams content down onto the touch mat, Sprout has a depth-sensing, 14-megapixel camera. As one of the first devices to ship with Intel's RealSense technology, it uses a trio of cameras to shoot the same image. If you happen to find RealSense in a tablet, that means you'll be able to adjust a photo's focus after the fact, because it's actually a composite. But for a product like Sprout, which is meant to live on your desk, the use case is entirely different. Here, having a camera like this means that you can photograph an object in your hand -- say, a 3D model -- and you have all the information you need for a 3D rendering onscreen. In fact, HP is bundling an app called 3D Snapshot, which was designed specifically for use cases like this. It's a little experimental, but it's something HP intends to flesh out over time. Right now, for instance, you can turn real-life objects into 3D renderings onscreen. Those images are then saved as a standard .OBJ file, allowing you to export it to CAD programs and 3D printers. All that's currently possible -- HP just says it can make the whole thing easier, more user-friendly. So stay tuned for that.

In any case, I led with CAD work because that happens to be the flashiest example, but there are other things you can do with the 3D camera, even if you're not a maker or engineer. I'd really encourage you to step back and think of the Sprout as a PC with a built-in scanner. You don't need a dedicated scanner when you have this; you can place anything under the camera -- paper, physical objects -- and Sprout will automatically do a very precise job of cropping out the background. And remember, too: HP has a deep background in multifunction printers. The company definitely knows a thing or two about scanning.

Now, that kind of speed and accuracy could be very interesting to a certain kind of person. Perhaps an ad man, like Don Draper. Imagine Don is sitting in front of his Sprout, working on an ad campaign for Florida oranges. He's got nothing but text on the page. Now, imagine he has an orange in his hand. He wants to somehow get that orange into his ad. He can hold it under the scanner, which will remove the background. Then he can flick his finger and very quickly get the image back onto the lower screen, where he can make it smaller, tilt it a bit, and make it fit in with the rest of the ad. Pretty neat stuff.

Humans in a digital world I saved the best party trick for last. Because the Sprout has both a projector and a camera, it can "see" what it's projecting onto your touch mat. I'm sure there will eventually be more use cases, but for now, you can do some pretty wacky things with collaboration. Assuming everyone involved is using HP's MyRoom app, you can not only share your screen, but you can do things like put your hands in the shot and move them around. Maybe flip through a magazine on camera, but with your desktop and all your other digital stuff in the background. When I watched HP demo this for me, I felt the way I did when I first saw Mary Poppins, with live humans hanging out in an animated world. A live video feed of a human and a screen sharing session of someone's desktop don't seem like things that could ever belong together. But they do here, and it's exciting to watch.

In this article: hands-on, hp, hp sprout, hpsprout, sprout
All products recommended by Engadget are selected by our editorial team, independent of our parent company. Some of our stories include affiliate links. If you buy something through one of these links, we may earn an affiliate commission.