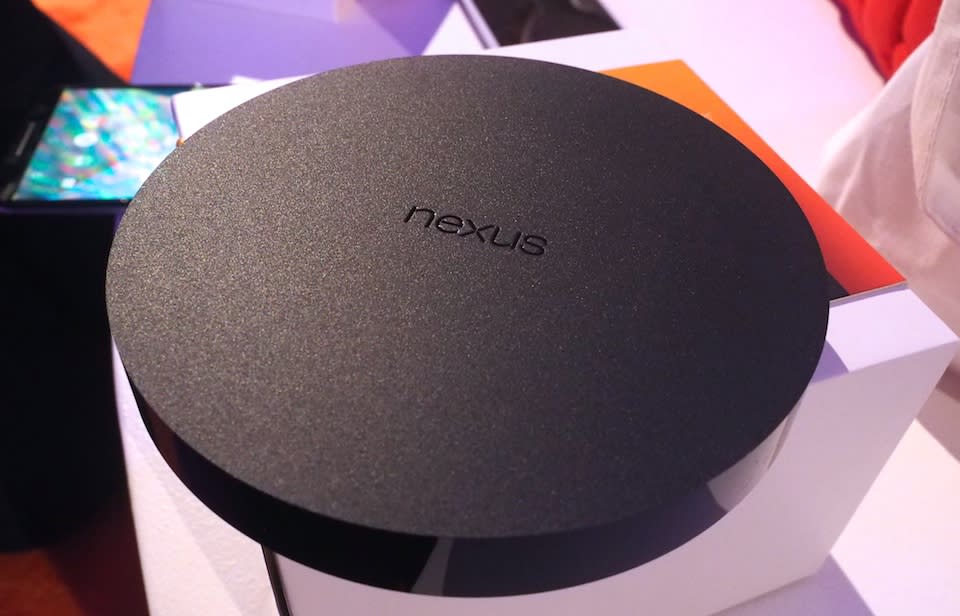 Google's wanted a piece of your living room for ages, and now -- after two attempts that never really went anywhere -- the search giant seems poised to get what it wants. Android TV is coming to, well, a TV near you, and we just spent a few brief moments wrapping our heads around Mountain View's vision of television with its new, ASUS-made Nexus Player. We've already taken a look at what Android TV wants to be, so let's talk a bit about the Nexus Player specifically. You can pre-order one now and it's expected to ship in early November, so feel free to think of it as the vanguard of Google's latest television invasion. Aesthetically, the Nexus Player won't raise any eyebrows -- it's basically a flattened hockey puck with the Nexus logo emblazoned right on top of it. Sure, the thing might not jibe with the rest of your home theater setup, but that's hardly a problem -- Google seems to hope you won't pay attention to the little guy at all.

You see, once everything's hooked up, the Nexus Player basically does what Amazon's Fire TV does -- it acts as a conduit to all the video Google's got in its Play Store coffers. Diving into movie categories and skipping through menus is generally a breeze with the (honestly chintzy) included remote, but what's more reassuring is the fact that the remote's tiny microphone seemed to work well in a room full of clamoring nerds. Why's that so important? Well, chalk it up to the magic of the Knowledge Graph. Holding down the mic button and uttering a query (say, "Oscar nominees from 2012") prompts the Player to tap into Google's vast web of information to highlight just the films that got the Academy Award nod that year.

Of course, the broad expanses of the Google Play Store contains more than just movies -- developers can create (or, you know, modify) apps to run on bigger screens through the Nexus Player, and you can use the remote to power through a few games that don't require much in the way of input. For the trickier fare, you've got the option to bust out ASUS' $39 gamepad. It (like plenty of its contemporaries) completely apes the layout of the Xbox 360's venerable controller, but the shoulder buttons lack resistance and the d-pad is decidedly on the squishy side. Good luck using it to fire off all those hadoukens. Meanwhile, the list of compatible video apps doesn't seem to have swelled much since the last time we saw it (still no HBO Go, alas), but at least there's still Netflix and Hulu to cling to. We'll be exploring what the Nexus Player brings to the table in greater detail as we work on our full review, but just remember this: Even if you don't buy one of these things, there's a still a decent chance Android TV will worm its way into your life. Sony? Sharp? Philips? All three have committed to making Android TV-powered sets come next year, so escaping Google's clutches from the couch may be tougher than you'd think.

In this article: android, androidtv, google, hands-on, hdpostcross, media, nexus, nexusplayer, steaming
All products recommended by Engadget are selected by our editorial team, independent of our parent company. Some of our stories include affiliate links. If you buy something through one of these links, we may earn an affiliate commission.