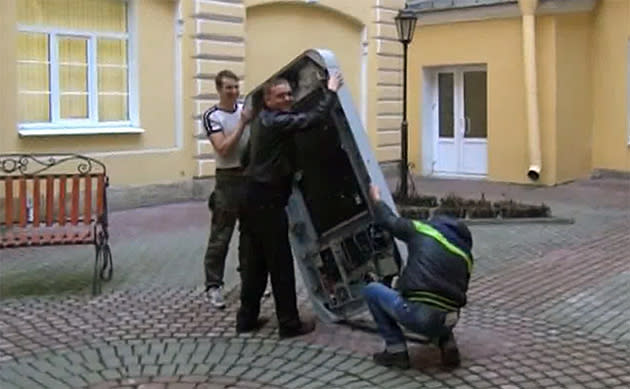 After Steve Jobs died in 2011, a Russian holding company called the West European Financial Union (or ZEFS, in Russian) erected a big, iPhone-shaped memorial statue that told visitors about Jobs' life outside a St. Petersburg college. An innocuous tribute, no? Nothing about the memorial itself was intrinsically troubling, but it's been recently dismantled all the same because of two reasons. First, ZEFS is looking at the act as a way of condemning the company for allegedly spying on users across the globe and "informing US security services about them." The second reason, however, sits on the fence between "mind-boggling" and "patently offensive." In accordance with a controversial law meant to curb gay "propaganda," ZEFS took down the statue "to abide to the Russian federal law protecting children from information promoting denial of traditional family values."

These people are concerned that the statue -- which specifically paid tribute to a past, dead Apple CEO and not the one who publicly and bravely acknowledged his sexuality in a Bloomberg Businessweek piece last week -- could erode the hearty Russian familial structure. Won't someone please think of the children? Oh wait, the Russian government has, and that's why its been trying to limit the "propaganda of homosexuality and other sexual perversions" minors should have access to. The location of the statue didn't help matters much, either -- its proximity to a school sparked concerns that it could lead bright youngsters passing by down a path of sin, because apparently laying your eyes on a statue is all it takes to completely rewrite your sexual preferences. Some future we live in, huh?

In this article: apple, gay, iphone, memorial, stevejobs, timcook
All products recommended by Engadget are selected by our editorial team, independent of our parent company. Some of our stories include affiliate links. If you buy something through one of these links, we may earn an affiliate commission.