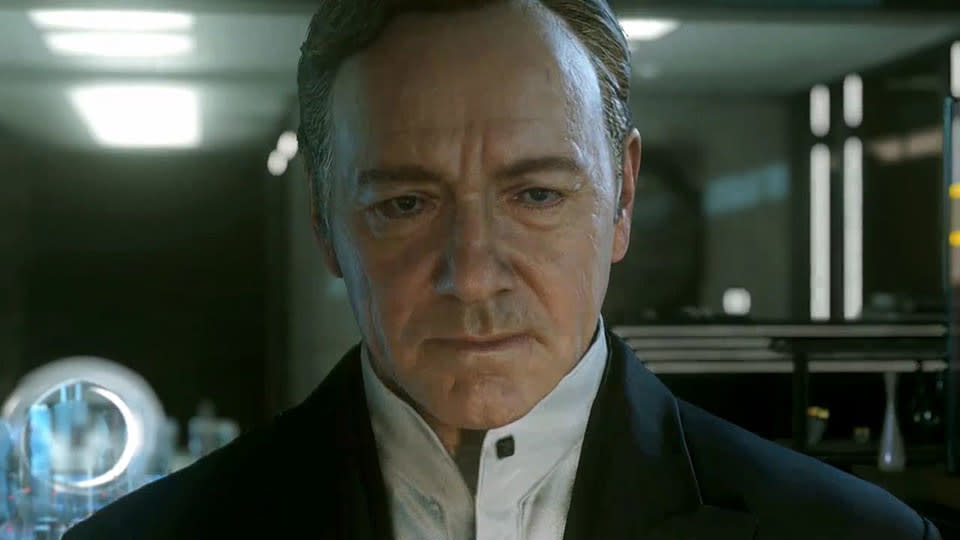 Call of Duty continues to be a pretty big deal. Despite annualized releases and the occasional stinker (we're looking at you, Modern Warfare 3!), people still love to wage virtual war on Activision's battlefields. Hey, we hear this year's game is pretty good! And when you've got a new Xbox One or PlayStation 4 this holiday, there's a strong possibility you'll want to check out this year's entry, Call of Duty: Advanced Warfare -- statistically speaking, anyway. Should you be one of those folks: beware! Both Xbox One and PlayStation 4 versions of CoD are having issues. The kind of issues that make the game outright unplayable.

Somewhere in Los Angeles, Kevin Spacey is shedding a single tear and he doesn't know why. So, what's going on with Call of Duty? It's down to platform. First up:

If you pre-loaded the game on PlayStation 4, Sony suggests deleting the file (nearly 40GBs) and pulling down the whole shebang once more. More specifically, it looks like Advanced Warfare issues on PS4 are strictly limited to folks who pre-loaded the game before launch (today). If you took advantage of said functionality, that may be why you're experiencing issues starting the game.

Here's what Sony suggest you do, in full:

If this doesn't solve the issue continue to [following steps]:

Please ensure you download all available updates for Call of Duty: Advanced Warfare and your system is running the latest system software."

Activision has yet to acknowledge the issues publicly, and we've not heard back from reps.

We've got firsthand experience with this one, and the issue is a little more prevalent than PlayStation's equivalent. If you buy Call of Duty: Advanced Warfare on disc, beware not to allow the game's update to download when you first insert the disc into your Xbox One. We said yes, and the game was unable to install from the disc. It ends up looping between "Installing" and "Queued," occasionally spinning up the disc, then quitting, then spinning again, then quitting again, ad infinitum. In the business, we call that "pretty whack." If you end up in this situation, we've got a tested solution -- and it works, at least on my Xbox One -- care of Crave Online:

Again, Activision has yet to acknowledge the issues publicly. We've asked. The company has forum threads set up to address issues with digital versions of the game, and an overall setup/installation page (which warns against playing the game before it completely installs, despite current-gen consoles allowing you to start before installation is finished). There's even a page dedicated to Xbox One installation issues, but nothing regarding the installing/queued loop that some folks are experiencing with disc versions of the game on Xbox One.

We'll update this piece as we hear more, but for now: Beware!

In this article: activision, callofduty, callofdutyadvancedwarfare, hdpostcross, microsoft, playstation4, ps4, sledgehammergames, sony, video, xboxone
All products recommended by Engadget are selected by our editorial team, independent of our parent company. Some of our stories include affiliate links. If you buy something through one of these links, we may earn an affiliate commission.