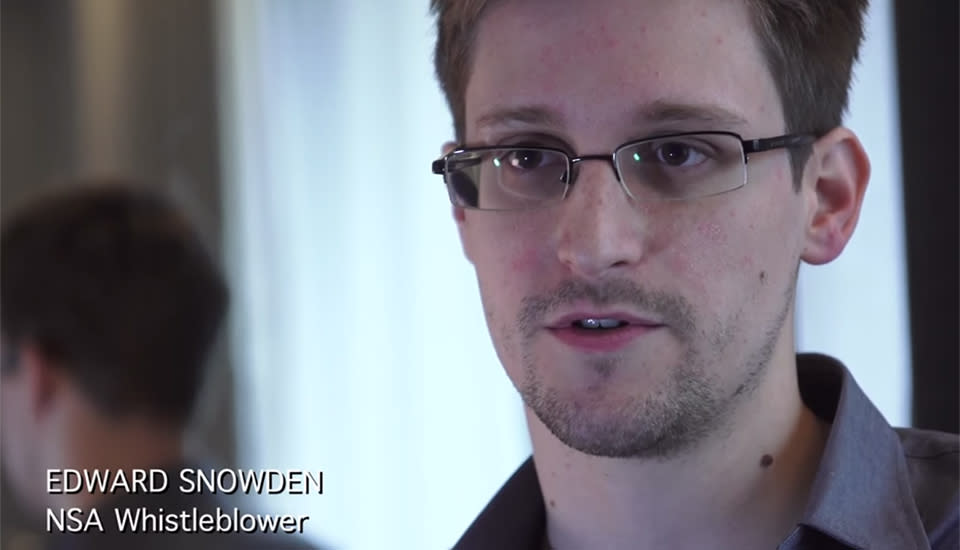 The camera pulls into focus; an audible wave of laughter ripples through the audience. In front of the camera is Edward Snowden, the man behind last year's NSA leaks. The reason for the laughter? The on-screen imagery belongs to the same interview that was beamed around the world, accompanying every TV spot and article mentioning his name for weeks after the leaks first hit. Anyone closely following last year's events, as many who packed into the sold-out screening at London's Institute of Contemporary Arts last Friday clearly had, was in on the joke -- this was the iconic image of Snowden. To those not intimately familiar with the story, however, the laughter could easily have been confusing.

This anecdote serves as the perfect summary of everything good and bad about Citizenfour, Laura Poitras' new documentary about how a journalist, a filmmaker and an NSA contractor worked together to expose this century's biggest political scandal to date.

To understand how and why the film came to be, a little history is required. Poitras is an award-winning film director who previously released a pair of superb documentaries on post-9/11 America, My Country, My Country, which focuses on life in US-occupied Iraq, and The Oath, which follows the lives of two men previously associated with al-Qaida. Citizenfour, the third part of Poitras' post-9/11 trilogy, was initially supposed to be a very different film, but two years into shooting, she was contacted by an anonymous source known as "Citizenfour," who was in possession of hundreds of documents regarding the widespread and invasive surveillance methods of the NSA and others.

Citizenfour would, of course, turn out to be Snowden, and with his guidance, a meeting was arranged between the pair and journalist Glenn Greenwald, who Snowden had attempted to contact months before. This eight-day rendezvous took place in a Hong Kong hotel room, and footage from that meeting comprises the bulk of Citizenfour's almost-two-hour running time.

Citizenfour begins slickly with Poitras reading aloud correspondence from Snowden, slowly building up to the clandestine meeting. By the time Snowden appears in person, around half an hour into the film, Poitras has expertly conveyed the importance of the events unfolding, and built enough tension to make the hotel scenes truly gripping. The pace is slow, but the fly-on-the-wall style holds your attention as well as any Hollywood thriller.

The hotel scenes mostly show Snowden explaining documents and NSA protocols to Greenwald, all the while growing increasingly nervous about evading detection. It's heavy viewing, for sure, but there are moments of humor and heart that go a long way to breaking up the action. There's a scene where, after a week in a single room, Snowden prepares to return to the outside world, which by now has his face plastered across every video billboard. There's a real sense of fear in his eyes. That Poitras can capture such tender, personal moments from behind a camera is a credit to her abilities as a filmmaker.

'Citizenfour' entirely glosses over questions of the illegality of Snowden's actions

Snowden, for the most part, is depicted as a calm, sincere man, with an awkward disposition and (understandable) paranoia about being watched. But although it rarely portrays him as a martyr, Citizenfour entirely glosses over questions of the illegality of his actions, going so far as to poke fun at the archaic charges of espionage leveled against him by the US government.

The fact that he indiscriminately stole, by recent estimations, well over a million intelligence files, and has acted as the gatekeeper of that information, is ignored. Indeed, much of the initial reporting, specifically on PRISM and the NSA's ability to "directly and unilaterally seize" data from tech companies' servers, was at best lacking an understanding of the technology involved, and at worst thoroughly hyperbolic. If you were not aware of these facts going into the film, you might leave the theater assuming all of the initial claims of NSA surveillance were 100 percent accurate.

Herein lies Citizenfour's problem. For those familiar with the leaks, it's a fascinating watch. Its cinema vérité style and skillful editing give the discerning viewer a truly unique look into the biggest political scandal in decades. But "vérité" means "truth," and as a documentarian, Poitras fails to give a full picture of her subject matter.

This is so much more than a documentary. It's a matter of record. It's news.

It's impossible to cut or edit footage without introducing editorial bias, of course, but in the case of Citizenfour, this becomes more important because it's so much more than a documentary. It's a matter of record. It's news. The choices made over what to include don't just affect the film; they affect the historical record. In the penultimate scene, Poitras reveals that Snowden's longtime partner is now living in Russia with him. Following the film's New York Film Festival premiere, this made headlines. If such a trivial fact is deemed newsworthy, you have to wonder what has been left on the cutting room floor.

The uncomfortable struggle between creativity and journalism is exacerbated in the final scene, wherein Greenwald is telling Snowden about a new source and a future scoop that goes all the way to the White House. For this sequence, Poitras abandons the film's unfussy aesthetic, replacing it with dramatic close-ups and fast cuts. The message is clearly that there are more revelations to come, and more whistleblowers to take on Snowden's mantle, but the result feels like it would be more at home after the credits of the latest Marvel blockbuster than in a documentary. It left me questioning whether there was really an earth-shattering disclosure on its way, or if this sequence was just creatively shot to make a statement. As the scene (and the film) ended, one nearby cinemagoer asked if the whole documentary was "a teaser trailer for a new Glenn Greenwald article."

Qualms with Poitras' approach won't stop me from recommending Citizenfour. Yes, it fails to convey the most important thing about the leaks: their actual content. But if you take the time to understand the subject matter before viewing, it offers an unprecedented opportunity to see history unfold.

In this article: citizenfour, documentary, laura poitras, leak, movie, nsa, prism, review
All products recommended by Engadget are selected by our editorial team, independent of our parent company. Some of our stories include affiliate links. If you buy something through one of these links, we may earn an affiliate commission.