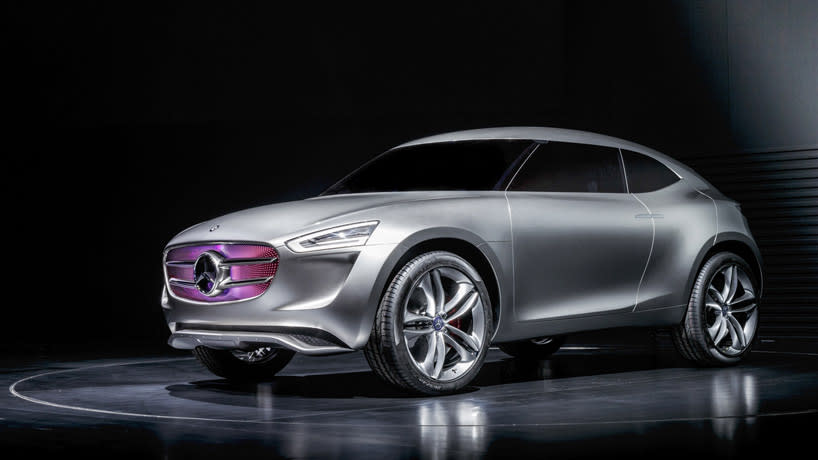 German car manufacturer Mercedes-Benz has debuted a new concept for a hydrogen-powered SUV, and it's pretty crazy. The Vision G-Code is as striking as any concept, with a squat profile and space-age interior, but it's not the car's looks that are interesting here: it's the paint. When the G-Code is stationary, its "multi-voltaic" paint generates electricity in a number of ways. It acts like a giant solar cell, turning the sun's energy into electricity, and also charges electrostatically, harnessing the power of the wind.

Instead of simply passing the electricity generated onto an internal battery, Mercedes uses it to facilitate hydrogen synthesis, creating fuel for the car's engine. The front wheels are powered by a hydrogen engine, while an electric motor drives the rear axle. It also has some other tricks to aid the production of hydrogen: on the move, further power is drawn from the G-Code's suspension system. One byproduct of the synthesis is oxygen, which Mercedes says "is routed to the interior as needed," providing "a refreshing effect for the occupants." Of course, it's worth remembering this is just a concept, and while its looks may filter down to upcoming models, it's unlikely we'll see the more innovative tech on display in any production cars soon.

In this article: concept car, hydrogen, mercedes-benz, photovoltaic, suv
All products recommended by Engadget are selected by our editorial team, independent of our parent company. Some of our stories include affiliate links. If you buy something through one of these links, we may earn an affiliate commission.