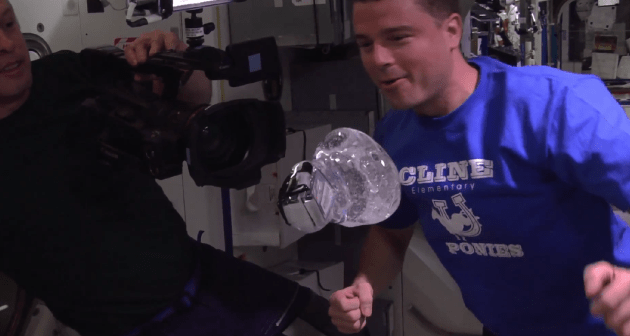 Astronauts aboard the ISS have been sending back space videos for years, but now they've stepped up their game: they just beamed back a couple of 3D footage taken by a Panasonic camera. These video clips take us on a 3D tour of the space station and show the astronauts submerging a sealed GoPro into a water bubble floating around in zero-g. By the sound of NASA's press release, though, we'll see more 3D videos in the future, as the camera used to take them fares batter in space. See, the radiation out there affects ordinary cams, burning out hundreds to thousands of pixels -- enough for them to need replacing every 8 to 12 months. The astronauts noticed, however, that the first $21,000 3D camera brought aboard the station in 2011 remained largely the same through the years.

According to NASA Imagery Experts program manager Rodney Grubbs, when the original 3D camera returned on a SpaceX rocket, they "found the overlay of the two stereo images forming the 3-D picture may have helped lessen the appearance of damaged pixels." The downside is that you'll need special glasses to view the videos properly, but you can always tap into your arts and crafts experience from grade school and make your own.

In this article: 3d, 3dCamera, 3dVideo, ag-3da1, gopro, iss, nasa, panasonic, space
All products recommended by Engadget are selected by our editorial team, independent of our parent company. Some of our stories include affiliate links. If you buy something through one of these links, we may earn an affiliate commission.