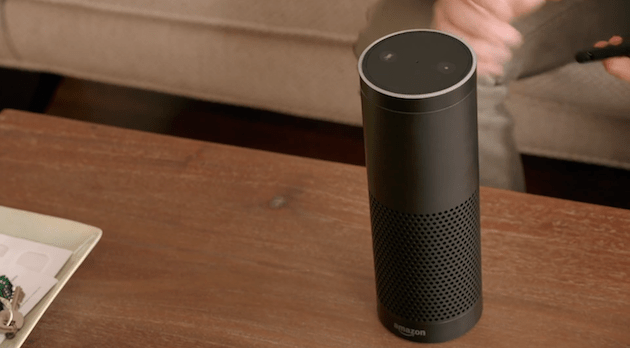 Last week it was a new streaming stick, and this week it's a speaker. Today, Amazon announced the Echo: a $199 speaker that caters to your Prime music, news and weather needs at the sound of your voice. Similar to "OK Google" command, a "wake word" gets the gadget to perk up before sorting those spoken cues like searches, setting alarms, relaying the forecast for tomorrow and more. It's kind of like having Siri, Google Now or Cortana stuffed into a diminutive household speaker. The audio accessory is connected to the retailer's cloud via WiFi, and it also allows for beaming Spotify or Rdio via Bluetooth. Thanks to a cylindrical design, the unit blasts out tunes and other bits in all directions so that everyone in the room can hear.

A group of seven microphones are scattered around the top of the speaker, which Amazon says allows the Echo to pick up your commands while it's playing Taylor Swift's 1989. What's more, that cloud connection enables the device to get smarter as it learns your speech patterns, vocabulary and personal preferences. There's a companion app to sort music, alarms, shopping lists and more on Fire OS and Android (also inside desktop and iOS browsers), as well as on-board controls to cue commands, adjust volume or disable the listening feature during weekend festivities.

Echo plugs in, so it's not portable like more straightforward efforts from Jawbone or Beats. While those devices were designed to be mobile, Bezos & Co. are clearly focused on the living room here, hoping you'll splurge for another purchase on top of the Fire TV to round out the entertainment arsenal. If you've been following voice-controlled gadgets, you're likely familiar with Ubi -- the compact device that plugs into a wall outlet to allow spoken commands to wrangle appliances and more. Amazon went a step further with this effort and stuffed the voice controls right into the speaker itself. Unfortunately, Echo is invite-only for now, but Prime subscribers that are lucky enough to nab one can do so at a $100 discount.

In this article: amazon, amazon echo, amazonecho, echo, speaker, video
All products recommended by Engadget are selected by our editorial team, independent of our parent company. Some of our stories include affiliate links. If you buy something through one of these links, we may earn an affiliate commission.