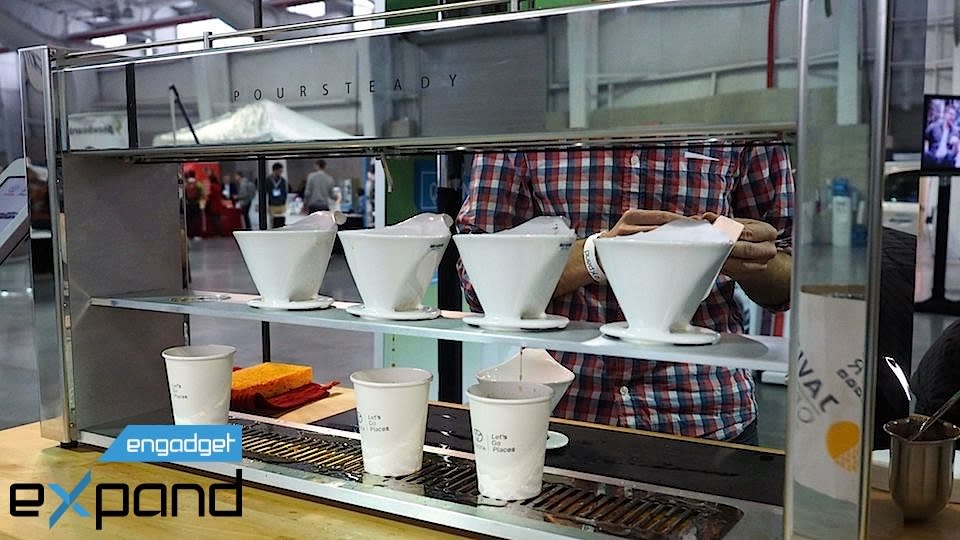 Coffee enthusiasts know that one of the best ways to brew the caffeinated beverage is via the pour-over method, a meticulous technique that requires a steady hand and precise timing. At coffee shops, baristas have traditionally brewed this style of coffee the old-fashioned way, carefully pouring hot water in a steady spiral stream over multiple filter setups. Not only can it be tiresome, it can also distract them from giving better customer service. Poursteady, however, is a potential solution to that. Designed by a group of designers and engineers in Brooklyn, New York, Poursteady is essentially a robotic pour-over coffee machine that handles the tedious task of timing and pour control so your friendly neighborhood barista won't have to. It operates via two motors on two different axes - a shuttle axis that moves the spout back and forth the five-filter rig, and a tilting axis that moves the nozzle forward and backward. The combination of the two moving together results in that spiral pour technique that the pour-over method requires. The water is piped from a hot water heater cleverly concealed underneath the counter.

When you press the button, the machine starts out by rinsing the filter, which also warms the cone and the cup underneath. The light will then blink, indicating that you should load it with the coffee grounds. Press the button again, and it'll wet the grounds for the initial "bloom," wait for a pre-set time period and then go ahead with the pour. And no worries if you're brewing five different cups: the robot is smart enough to not get ahead of itself. Everything, from the amount of water to brew time, is controlled via a smartphone app. Poursteady CEO Stephan von Muehlen tells me that it's only a HTML5 app for now, but the team hopes to release a native app soon. It works over WiFi at the moment, but a Bluetooth implementation is possible later on.

So, does it work? Well, the team recently showed off their product at Maker Faire in New York, where they apparently made over 950 cups of coffee in a single day using the machine. They're also here at Expand New York, partaking in Engadget's Insert Coin competition. Indeed, Poursteady actually launched its Kickstarter campaign on the Friday of the show, with a goal of $15,000. If you want to get one right now, however, you'll have to cough up a considerable amount: the Kickstarter introductory offer is $10,000 while the actual final cost will likely be much higher as it has to account for the machine's industrial-level components. But, hey, if you're a commercial coffee shop owner, it could be well worth it for a machine that'll make brewing pour-over coffee that much easier.

Edgar Alvarez contributed to this report.
In this article: coffee, engadgetexpand, expandny, insertcoin, pourover, poursteady, TL16COFF
All products recommended by Engadget are selected by our editorial team, independent of our parent company. Some of our stories include affiliate links. If you buy something through one of these links, we may earn an affiliate commission.