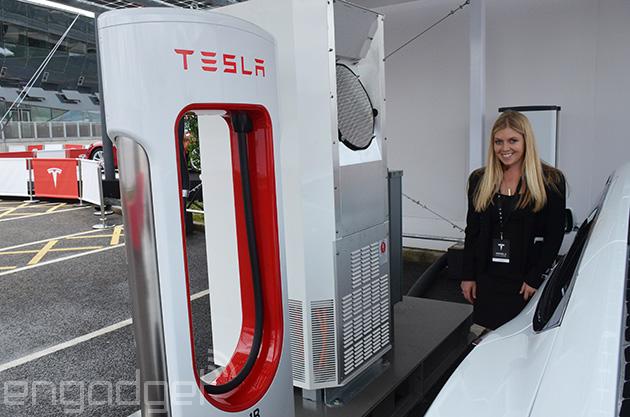 Tesla's UK presence might be small, but the company is slowing starting to make inroads. To get things moving outside of London, the electric car manufacturer has opened its fourth domestic retail store in Birmingham and says it's already hiring for new operations in Manchester, Bristol, Newcastle and Edinburgh. To sell the dream of an electric vehicle though, the company needs to increase the size of its free Supercharger network. Today the company promised that within six months, all Model S owners will be able to drive the length of the UK using Tesla's chargers alone. To kick things off, Tesla has officially unveiled six new sites; three in London (Canary Wharf, Tower Bridge and Westfield White City) and a further three in Reading, Bristol and Edinburgh. Some of these may have been open already for testing purposes, but today anyone can pull up in their Model S and start recharging for free. It's a small step forward, but with 83 stations now live in Europe, Musk and co. have proved they're serious about penetrating the continent.

In this article: electric vehicle, Elon Musk, EV, models, Tesla, tesla model s
All products recommended by Engadget are selected by our editorial team, independent of our parent company. Some of our stories include affiliate links. If you buy something through one of these links, we may earn an affiliate commission.