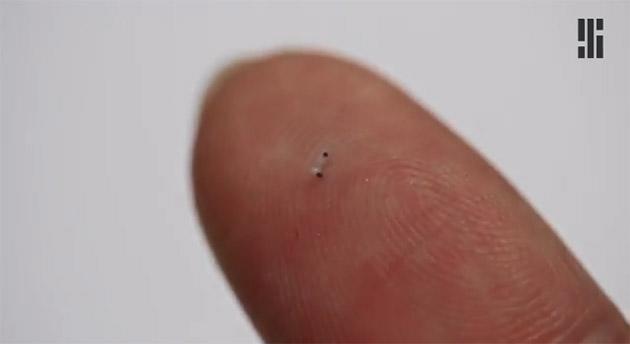 For years now, scientists have been trying to develop microscopic robots that can swim through bodily fluids and repair damaged cells or deliver medicine. Now, scientists from the Max Planck Institute for Intelligent Systems in Germany believe they've got the perfect design -- in the form of scallops so small, they can barely be seen by the naked eye. These micro-robo-scallops move back and forth to swim through blood, eyeball fluids and other liquids inside our body. The scientists believe mimicking the way a true scallop swims is ideal, due to a number of reasons.

First, moving backward and forward is the best way to swim through non-Newtonian fluids, or liquids that can grow thicker or thinner, depending on the situation. As you've likely guessed, our bodily fluids are good examples (so is oobleck, or the 1:1.5-2 mixture of water and cornstarch -- seriously, try it out for yourself), as opposed to water, which can retain its viscosity. Second, the micro-scallops don't need much power be able to move that way. They don't require batteries or even motors -- just the energy provided by an external magnetic field.

According to the scientists, they don't have a particular purpose in mind for their minuscule scallop. Instead, they're hoping it becomes a reference design for other teams and companies that want to develop advanced medical technologies. If you're willing to follow these robots' example and swim through some scientific terminology, head over to Nature where the team's paper was recently published.

In this article: experiment, medicine, microrobot, robot
All products recommended by Engadget are selected by our editorial team, independent of our parent company. Some of our stories include affiliate links. If you buy something through one of these links, we may earn an affiliate commission.