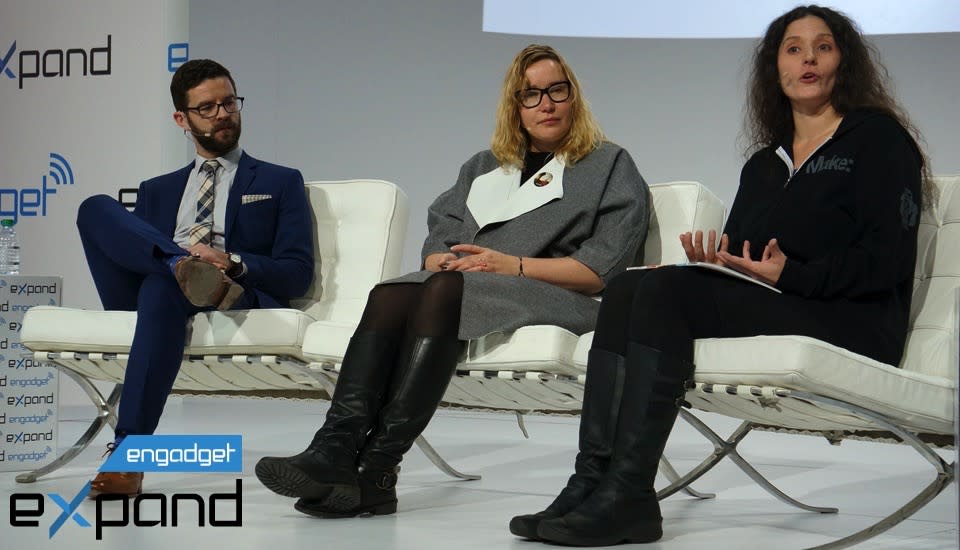 When you think of what 3D printing can do, you probably imagine simple plastic models and parts -- clever, but not exactly revolutionary. If you ask Dovetailed's Vaiva Kalnikaite and Make's Anna Kaziunas France, however, they'll tell you that 3D printers can accomplish much, much more. Dovetailed's 3D-printed fruit is just the start of what you can do with food, for example. Kalnikaite told Engadget Expand guests that 3D printing offers not just extra creativity with how you present meals, but a way to change the meals themselves. Do you like the taste of bananas, but not their texture? You could print food that offers everything you like, and nothing you don't. This could be particularly helpful if you have a food allergy, since you could enjoy food that was previously off-limits.

Kaziunas France adds that even relatively ordinary printers are working with a lot more than plastic. There are new and modified printers that can handle bronze fills, nylon and other materials that improve the quality of objects; they don't feel quite so much like prototypes. Laser sintering (which packs powders into solid forms through heat and pressure) also upgrades the appearance and behavior. It'll be a long while before you're working with difficult substances like metal, but you're no longer bound by many of the technological limits of years past.

The biggest developments in 3D printing may not be so much technological as cultural. "Everyone likes custom things," Kaziunas France says -- a craftperson might not care much about 3D printers by themselves, but they're much more interesting as tools for producing tailor-made goods. Jewelers and other stores already use the technology to help personalize their wares, and there's a good chance that you'll see those uses grow in ways that you might not have anticipated.

So what's left to overcome? For the most part, it's the same things that once held back home computers: size and cost. Kalnikaite notes that you probably wouldn't want to shove a big 3D printer into a tiny New York City apartment, for instance. And while prices have already come down, they have to keep dropping before you can easily put a 3D printer in your home. Kaziunas France also notes that the 3D printer industry has a tendency to "overengineer the problem." It wants to create monolithic devices that include everything, such as printing and scanning, but the best approach may be to create multiple specialized devices that do their jobs very well.

In this article: 3dprinter, 3dprinting, annakaziunasfrance, dovetailed, engadgetevents, engadgetexpand, expand, expandny, expandny2014, make, sintering, vaivakainikaite, video
All products recommended by Engadget are selected by our editorial team, independent of our parent company. Some of our stories include affiliate links. If you buy something through one of these links, we may earn an affiliate commission.