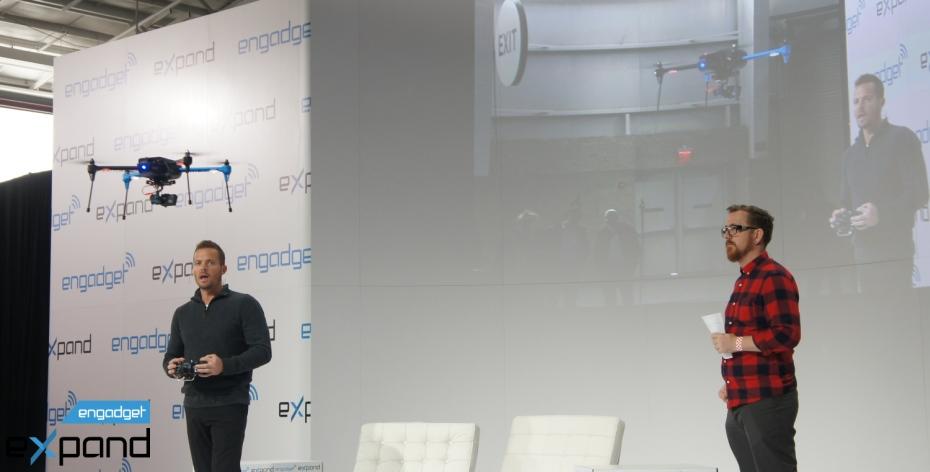 The FAA might not know what to do with drones, but UAV technology is moving so fast we're thinking more "when," not "if" the skies will be filled with quadrocopters. To help more people jump into the future, 3D Robotics SVP of Sales and Marketing Colin Guinn joined us at Expand to show off the company's drone tech that makes the learning curve easier. He brought along the Iris+ drone, which expands upon the original model released last year by adding more autonomous smarts. Not only can it can take off and land by itself, but it can also orient around you for a third-person chase cam/drone selfie, or follow a predetermined, GPS-guided path to take aerial photography. It packs a GoPro-ready mount, datalink that lets you fly it from your PC/Android/iOS/etc. and is available now for $750. It can fly for a little over 20 minutes on a charge and just needs its propellers screwed on to work out of the box. If you've wanted to get into drones, but were concerned your first flight could be your last, the Iris+ was made with you in mind. Check out the full demo and discussion after the break to find out just how easy handling one of these can be.

In this article: 3drobotics, drone, expand2014, expandny, interview, iris, irisplus, uav, video
All products recommended by Engadget are selected by our editorial team, independent of our parent company. Some of our stories include affiliate links. If you buy something through one of these links, we may earn an affiliate commission.