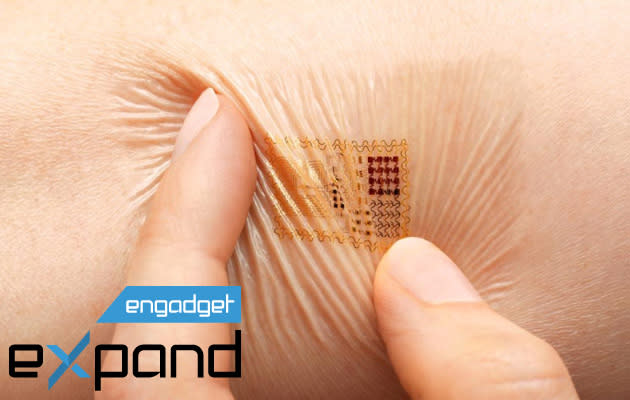 There's no denying that the wearable craze is upon us, whether we like it or not. MC10 is quite familiar with employing sensors to deliver info on training and athlete performance, and it's looking to do even more. If you'll recall, the outfit was behind the Checklight -- developed alongside Reebok -- for monitoring blows to the head and the potential for concussions. Now the company is working on a sticker that collects data, and more importantly, isn't confined to a specific location -- like your wrist. So, just what's the advantage to compiling the loads of info that your body generates? Well, there are quite a few really.

First, there's the unobtrusiveness of wearing a Biostamp sticker rather than a bulkier gadget on your wrist or clipped elsewhere. This sensor can be worn 24 hours a day, collecting all of the data that your body gives off, from how well you slept to hydration levels and more. There's also the potential for dialing in the perfect amount of training. Athletes, and us regular folks too, struggle with knowing when things have gone too far on a run or at the gym, and wearable tech is poised to help get that part of the equation just right. Until now, recovering from an injury was mostly determined by how you felt, but there's the potential to know when you're 100 percent based on numbers from pre-injury performance. Hitting the court again when fully recovered will certainly cut down on the potential for re-injury, too.

"The consumer is going to expect that if you say a device can do something, that it does it accurately," says MC10's Isaiah Kacyvenski. He hits on a key stumbling block for a lot of existing devices: the ability to provide accurate measurement. Once that hurdle has been conquered and durability is put to the test, taking the guesswork out of all aspects of training is the goal across the board for MC10. What's more, think about the potential uses for all of the data. Scenarios like contract negotiations and boosting real-time viewing for fans or fantasy football addicts with detailed metrics posted instantly alongside the regular in-game numbers. It may sound a bit far-fetched, but the NFL is already using RFIDs to track speed and other quite specific metrics.

Tons of super high-tech equipment exists to measure aspects of performance, but it's about bringing the ability to learn from the data to everyone, not just athletes with access to a facility full of expensive machines. "What we want to do is democratize the lab," Kacyvenski explains. And he's getting insight from the likes of Grant Hill and Andrew Luck to gauge what's useful. In the end, that likely means we'll all be able to fine-tune our fitness regimens with a lot fewer injuries thanks to a lot more insight.

In this article: expandny, mc10, sports, video, wearables
All products recommended by Engadget are selected by our editorial team, independent of our parent company. Some of our stories include affiliate links. If you buy something through one of these links, we may earn an affiliate commission.