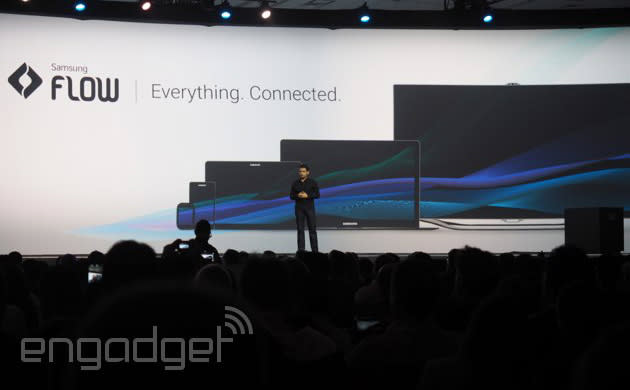 Samsung makes a lot of products, from wearables to phones to large-screen televisions. So why not try to tie everything together? That's the idea behind Samsung's Flow, which could be seen as the company's answer to Apple's Continuity. Announced today at Samsung's Developer's Conference, Flow lets you move tasks from one device to another and even do things like view incoming calls and messages on your Samsung TV. There are essentially three components: Transfer, Defer and Notify. Transfer lets you do things like read a shared article on your tablet or move a video call from your laptop to your phone. Defer lets you put off a task until you're ready, so you can fix that PowerPoint slide when you get to work, or pick up that movie on your phone when you're in the subway. Last but not least is Notify, which as we mentioned, lets you view notifications on any screen, be it your watch or your computer. You'll even get device status updates on your television, for example, so you can see if your phone is running low on battery. The Flow SDK was just released to developers today, so don't expect to see this feature on your Galaxy-branded device just yet.

In this article: samsung, samsungflow, sdc, sdc2014
All products recommended by Engadget are selected by our editorial team, independent of our parent company. Some of our stories include affiliate links. If you buy something through one of these links, we may earn an affiliate commission.