Turing Award winners include AI giants from Facebook and Google

Google makes the 'Nobel Prize of computing' worth $1 million 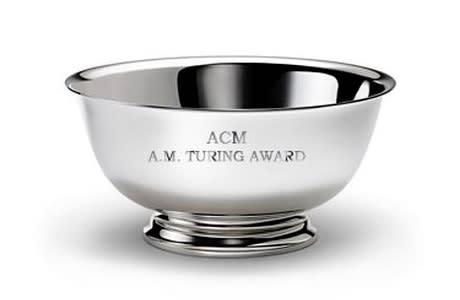 The Association for Computing Machinery's A.M. Turing Award is often called the "Nobel Prize of computing." Every year since 1966 it's been awarded to an accomplished computer scientist or engineer like Douglas Engelbart, the inventor of the computer mouse. But chances are you've never heard of the award at all, despite it being named after legendary Allied Forces code-breaker Alan Turing. That's because it's never really been that big -- no huge sponsors meant it didn't get a lot of promotion, and the annual prize was limited to a relatively modest $250,000. That's about to change with the 2014 award thanks to the largess of Google. The company's been a co-sponsor of the award since 2007 alongside Intel, but now they're taking full control of the prize money, upping the package fourfold to a rather hefty $1 million.

We won't know who the first lucky recipient of $1 million will be until next year, but they'll join a list of luminaries that includes Silvio Micali. He won the award in 2012 for his work in cryptography, which made it easier to verify mathematical proofs in the study of complex systems. At an ACM event this morning he told an audience of fellow computer scientists that we need to "encourage our young scientists" by rolling out "a bright red carpet on what used to be a dangerous path." Hopefully Google's $1 million dollar prize will do just that.

In this article: ACM, ACM Turing Award, Alan Turing, google, Turing Award
All products recommended by Engadget are selected by our editorial team, independent of our parent company. Some of our stories include affiliate links. If you buy something through one of these links, we may earn an affiliate commission.