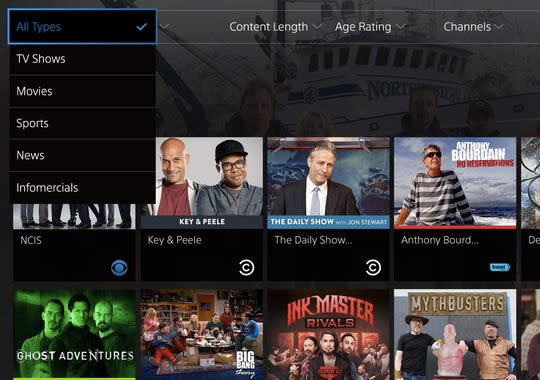 If you thought cramming a PlayStation into your TV with the cloud-based PS Now was crazy, Sony's now trying to do, well, the exact opposite, bringing broadcast TV (and a bigger dose of on-demand content) to the PS4, PS3 and, at a later date, even the iPad. Oh good, another subscription service, you might already be thinking. However, Sony has already signed up some major networks and players (Fox, CBS, Viacom and ABC, for starters) and a no-contract setup: you'll pay month by month -- like how you pay for Netflix. The tie-ups will also include the ability to record programs, as well as play selected on-demand content. More device support for both Sony and non-Sony hardware is set to roll out to the service in the future, although there's no specifics just yet on what that'll include -- likewise, pricing remains a mystery. Beta testers will see around 75 channels of content, including local networks, when tests start later this month, although there's one proviso: they have to live in NYC, before it rolls out to Chicago, Philadelphia and LA. For the rest of us, the entire service is set to go live in early 2015.

While the service was originally teased back at CES 2014 in January, this is the first time it's been given a name -- and well, some tangible details. According to SCE, anyone that pays up will be able to save their favorite shows within their account without storage restrictions or scheduling conflicts: it sounds like you won't be using any offline storage, although we imagine there would be an offline viewer of sorts. Once a show is tagged, you'll be able to watch it for up to 28 days after.

In this article: fox, hdpostcross, iptv, nbc, playstation, playstationvue, SCE, sony
All products recommended by Engadget are selected by our editorial team, independent of our parent company. Some of our stories include affiliate links. If you buy something through one of these links, we may earn an affiliate commission.