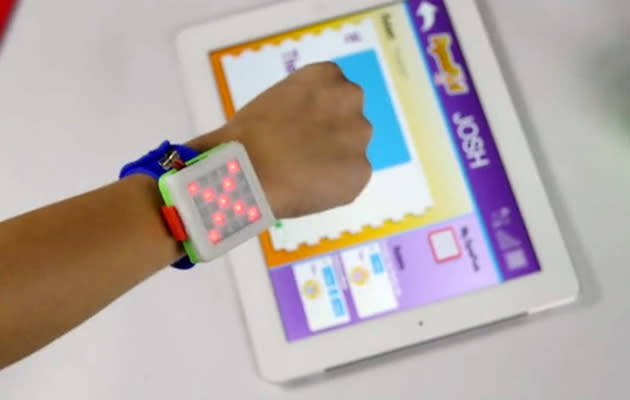 There's no shortage of smart toys, but they tend only to talk to each other. What if your kid wants the freedom to use them with just about anything? That's where Dynepic's upcoming DynePod might help. It may look like a simple 25-pixel block of LEDs, but it's really the centerpiece of an "internet of toys" that lets it both respond to simple programming and dish out input of its own, whether it's talking to another DynePod or something else entirely. You can tell it to light up when there's movement, or buzz if another device is nearby; built-in motion sensors let it serve as a controller. Parents can even use it to set alarms, and at least the initial kits will come with a mounting clip and a bracelet. Yes, you can turn this into Junior's first smartwatch. The long-term plan is to have an open platform that has toys of all kinds speaking to each other.

If you want in early, you can pledge $79 or more to Dynepic's crowdfunding campaign to get a DynePod of your own. The first wave should ship in June, if all goes well. That's quite a bit to pay, but the hope is that young ones will learn to program and start tinkering with gadgets; if the DynePod helps them get comfortable with connected technology, it might pay for itself.

In this article: children, crowdfunding, dynepic, dynepod, internetofthings, kickstarter, kids, toy, toys, video
All products recommended by Engadget are selected by our editorial team, independent of our parent company. Some of our stories include affiliate links. If you buy something through one of these links, we may earn an affiliate commission.