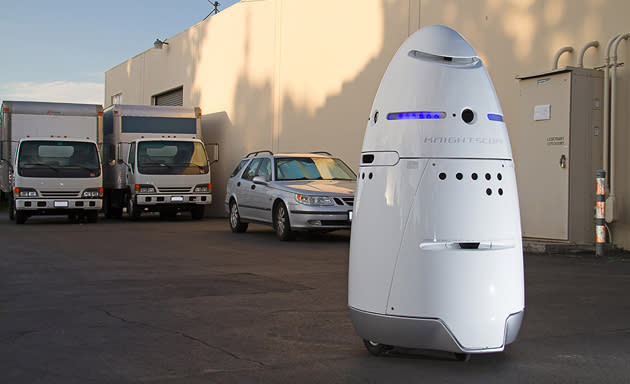 You might not see quite so many security guards on the beat in the future. After roughly a year of work, Knightscope is almost ready to deploy the K5, a human-sized (5 feet tall) autonomous robot that's designed to take care of the more mundane parts of security patrols. The machine only needs a bit of initial instruction (plus GPS and laser rangefinding) to get a feel for its surroundings. After that, it keeps watch on its own using a mix of four cameras, microphones, radar and environmental sensors that can detect fires and gas leaks. The K5 uses either cellular data or WiFi to both share its findings and let its overseers speak, and it'll set off an alarm if you try to immobilize it.

Only four K5s are going into service by the end of the year; while that's better than other robots, many of which are strictly experimental, it's not ushering in a sea change. If automatons like this catch on, though, they could change how building security works. Independent robots will let human guards respond only when it's both necessary and safe, such as to confront an unarmed intruder or help out the injured. That's not going to be much comfort to employees that might not be needed for much longer, but the bots could be worthwhile if they keep people out of harm's way.

In this article: autonomous, k5, knightscope, robot, robots, security, securityguard
All products recommended by Engadget are selected by our editorial team, independent of our parent company. Some of our stories include affiliate links. If you buy something through one of these links, we may earn an affiliate commission.