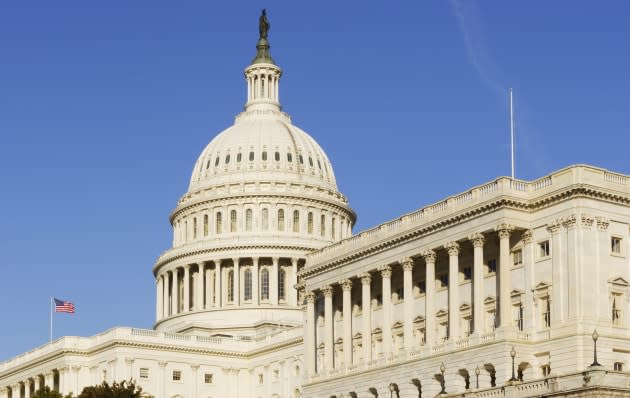 Google, Apple, Microsoft, Twitter and Facebook. Normally these companies are mortal enemies. But, when it comes to curbing government surveillance, they're all on the same page. They've joined forces to form the Reform Government Surveillance coalition. The group is calling the US Senate to pass the USA FREEDOM Act, which could go up for vote as early as this week. The bill would enact a number of important reforms regarding the government's collection and use of data. For one it would end the practice of bulk metadata collection from the internet. It would also demand greater transparency from both the government and the tech companies themselves.

The group sent a letter to the Senate urging them to pass the law, which they acknowledge doesn't go far enough. There is still work to be done in better defining the grounds on which the government can request data and a more robust legal infrastructure needs to be in place to manage efforts to tap that information. But still, they contend it represents meaningful reform. In total nine CEOs signed the letter, including the CEO of Engadget's parent company AOL. If you're interested, you can read the entire letter below.

Dear Members of the Senate:

It's been a year since the first headlines alleging the extent of government surveillance on the Internet.

We understand that governments have a duty to protect their citizens. But the balance in many countries has tipped too far in favor of the state and away from the rights of the individual. This undermines the freedoms we all cherish, and it must change.

Over the last year many of our companies have taken important steps, including further strengthening the security of our services and taking action to increase transparency. But the government needs to do more.

In the next few weeks, the Senate has the opportunity to demonstrate leadership and pass a version of the USA Freedom Act that would help restore the confidence of Internet users here and around the world, while keeping citizens safe.

Unfortunately, the version that just passed the House of Representatives could permit bulk collection of Internet "metadata" (e.g. who you email and who emails you), something that the Administration and Congress said they intended to end. Moreover, while the House bill permits some transparency, it is critical to our customers that the bill allow companies to provide even greater detail about the number and type of government requests they receive for customer information.

It is in the best interest of the United States to resolve these issues. Confidence in the Internet, both in the U.S. and internationally, has been badly damaged over the last year. It is time for action. As the Senate takes up this important legislation, we urge you to ensure that U.S. surveillance efforts are clearly restricted by law, proportionate to the risks, transparent, and subject to independent oversight.

In this article: aol, apple, dropbox, facebook, google, government, law, linkedin, microsoft, NSA, reform, Reform Government Surveillance, surveillance, twitter, yahoo
All products recommended by Engadget are selected by our editorial team, independent of our parent company. Some of our stories include affiliate links. If you buy something through one of these links, we may earn an affiliate commission.